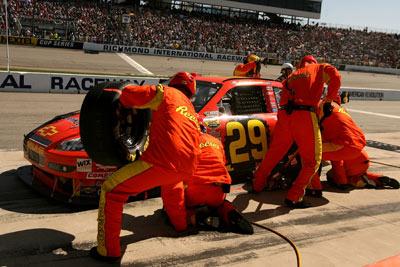 NASCAR officials invest a lot of time and energy inspecting each car to make sure it conforms to the technical regu­lations. These inspections occur several times over the race weekend: before the first practice, before qualifying, after qualifying if a driver wins the pole position, just before the race and immediately after the race. What exactly are NASCAR officials looking for? In the NASCAR Nextel Cup Series, inspectors examine:

Interestingly, NASCAR doesn't have rules that govern how drivers compete on the track. However, there are unspoken rules, known as gentlemen's agreements, that most drivers follow. Gentlemen's agreements rely on the honor of all drivers to compete with a certain amount of respect and courtesy, but as you can imagine, some drivers abide by these agreements more than others. NASCAR can penalize a driver for rough driving, so even "bad boys" must be careful not to go too far.

How drivers behave in the pit stops is a different story. Pit stops are one of the most highly regulated aspects of a NASCAR race. It starts when a driver leaves the race for pit road, which is a separate road running parallel to the main track. Pit roads have posted speed limits -- usually 35 to 55 miles per hour -- so a driver must slow down or risk being penalized. He must also park his car completely within the team's designated pit stall, which is marked off with yellow lines. If his car needs repairs or is leaking fluid, he must go behind the pit wall that separates the pit stall from the equipment storage area. Otherwise, for tire changes and/or fuel refills, he can remain in front of the wall and let the pit crew work its magic. Only seven crew members are allowed to go over the wall to service a car. There are two tire changers, two tire carriers, one jackman, one gas man and one catch-can man, who collects any gas that spills while the fuel cell is being filled. NASCAR rules state that a team may use only two air guns and one jack per stop.

NASCAR officials cover rule changes and other important information at the drivers' meeting, held two hours before each race. The crew chief and the driver of every team are required to attend. If either misses the meeting, the driver automatically starts the race in last place, even if he qualified for the pole position.