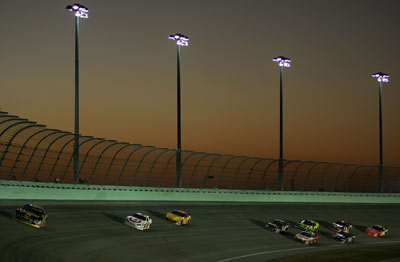 Cars race around the track in the NASCAR Nextel Cup Series Ford 400 at Homestead-Miami Speedway in Homestead, Fla., on Nov. 18, 2007.
Robert Laberge/Getty Images for NASCAR

The National Association for Stock Car Auto Racing, or NASCAR, was founded in 1947 by Bill France Sr. The term "NASCAR" describes the sport itself and the sanctioning body that governs stock-car racing. This naming convention is not universal across all motor sports. In Formula One racing, for example, the governing body is the Federation Internationale de l'Automobile (FIA). In championship drag racing, the National Hot Rod Association (NHRA) promotes and sanctions events.

Let's take a closer look at both the organization and sport of NASCAR to understand the basic structure of stock-car racing.

NASCAR is based in Daytona Beach, Fla., the mecca of auto racing. Today, it has offices in Los Angeles, New York, Mexico City, Toronto, Bentonville, Ark., and Charlotte, Concord and Conover, N.C. From these locations, NASCAR sanctions 1,500 races at more than 100 tracks in 35 U.S. states, Canada and Mexico. The governing body makes the rules, runs the events and makes sure the drivers follow the rules. More importantly, it manages the major racing series and crowns a champion at the end of each season.

As a sport, NASCAR is a variety of racing series. A series is similar to a league in another sport -- a group of teams or individuals who compete in a set number of events and follow rules established by a sanctioning body. Football, for example, has several leagues. There are professional leagues, like the National Football League and the Arena Football League, but there are also many semipro and amateur leagues. Stock-car racing accomplishes the same thing with its various racing series.

NASCAR consists of several series at the national, regional and local levels. The three national series include two for stock cars -- the NASCAR Nextel Cup Series and the NASCAR Busch Series -- and one for race trucks, the NASCAR Craftsman Truck Series. It was formed in 1995 to enable the sport to grow without cannibalizing the Nextel Cup Series or the Busch Series. Trucks that race in the Craftsman Truck Series are similar to normal full-size pickups, with these differences:

Drivers who succeed in th­e Craftsman Truck Series will sometimes venture into the world of stock cars. Their first stop is often the NASCAR Busch Series, a stepping-stone league that allows young drivers to gain experience before they graduate to the Nextel Cup Series. Busch Series racers follow the same on-track rules that govern races in the Nextel Cup Series, but their cars are slightly different. The biggest difference between the two types of cars is the power output of the engines. Busch Series engines generate approximately 660 horsepower, compared to about 790 horsepower generated by Nextel Cup Series engines. Even still, cars in the Busch Series can travel almost as fast as their Nextel cousins, mainly because they weigh about 100 pounds less.

In 2008, the Busch Series will change its name and become the Nationwide Series. NASCAR and Nationwide announced a seven-year partnership agreement in October 2007, making the insurance company the official auto, home and life insurance provider of NASCAR. The 2008 NASCAR Nationwide Series championship will incorporate very few changes, but in 2009, fans can expect to see significant changes in the cars, including new body styles and aerodynamic packages.