The Future of NASCAR 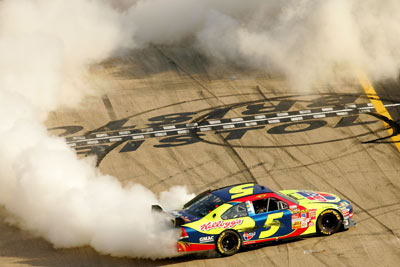 Kyle Busch, the first driver to win a race in the Car of Tomorrow, does a burnout after winning the NASCAR Nextel Cup Series Food City 500 at Bristol Motor Speedway on March 25, 2007, in Bristol, Tenn.
Chris Graythen/Getty Images for NASCAR

If everything goes right, the driver may actually win the race. Then it's off to Victory Lane, where he can celebrate with team members and family. He must also satisfy all of his sponsors by posing for photographs with caps sporting sponsor logos. This is known as the "hat dance." A bottle of champagne, sprayed out over the team, is the finishing touch.

There's much more at stake than a trip to Victory Lane, however. As we discussed earlier, drivers earn points based on their performance in a race, and earning points gets them closer to the Chase for the NASCAR Nextel Cup. More importantly, drivers draw their salary from the races. The following list shows a breakdown of the winnings available to a driver:

As a result, drivers can earn significant amounts of money. Jeff Gordon, one of the most successful drivers in NASCAR history, surpassed the $50 million mark in career earnings in 2002 -- after only 10 years in the sport. After the 2007 season, his career earnings totaled about $65 million [source: FOX Sports].

The Future of NASCAR

NASCAR has come a long way since it was founded in 1947. Many of the innovations in the sport have been technical improvements to the cars and tracks, making NASCAR racing safe without compromising excitement. One of the biggest innovations is the Car of Tomorrow, known as the COT. The Car of Tomorrow is a universal car that NASCAR hopes will eventually yield safer, more competitive and less expensive racing. This chart summarizes the specs of the Car of Tomorrow. Teams used the newly designed race car for 16 events in the 2007 NASCAR Nextel Cup Series. In 2008, it will be used at all events.

While some fans feel the Car of Tomorrow is too big of a change for the sport, just consider what Red Byron, who won the first NASCAR Strictly Stock championship in 1949 driving an Oldsmobile coupe, would say about today's cars, drivers and tracks. No doubt he would hardly recognize the equipment, although he would be quite familiar with the hallmarks of NASCAR -- adventure, thrills and excitement -- that won't ever change.

To learn more about NASCAR, check out the links below.