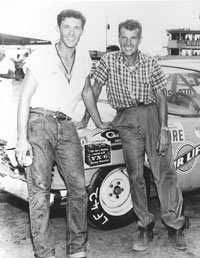 Richard Petty and his father, Lee, at Darlington, S.C., in 1960 with Lee's Plymouth
RacingOne/Getty Images

And, of course, we can't forget the driver. As the most visible part of a team, the driver does more than make a few hundred left turns every Su­nday. Today's driver must also participate in test sessions, make appearances at sponsor events (how many depends on his contract), stand in front of a camera for commercial shoots and much, much more. One of the driver's most important roles is keeping his crew chief, mechanics and engineers "connected" to the car. After all, he's the one behind the wheel day in and day out, so he's in the best position to provide feedback about how the car is handling. Based on his input, the team can make adjustments -- to the tires or to the suspension, for example -- until the car runs better.

Clearly, having knowledge about cars is helpful for a driver, but it's not an absolute requirement. Some grow up in and around the garage of a NASCAR team. Others don't. Either way, drivers must have the following characteristics if they are to be successful in NASCAR racing:

A NASCAR pedigree is not a requirement to be a winner, but many families have produced their share of great drivers. Consider the Pettys. Lee Petty, the patriarch of Petty Enterprises, won the inaugural Daytona 500 in 1959. By the time he retired just five years later, he had recorded 54 wins, 231 top-fives, 332 top-10s and 18 poles. He was succeeded by his son Richard, who is known in NASCAR as "The King." Richard Petty's 200 victories are a NASCAR record, as are his seven NASCAR Cup championships (an honor he shares with Dale Earnhardt). Richard also holds the record of 1,184 lifetime starts, 126 career poles, most laps completed, laps led, races led and miles led. Richard's son Kyle followed in his father's footsteps. Kyle Petty started 600 races, earning eight victories, 51 top-five finishes and 167 top-10s. Sadly, Kyle's son Adam, another NASCAR driver, died in 2001 while practicing for a race in the NASCAR Busch Series.