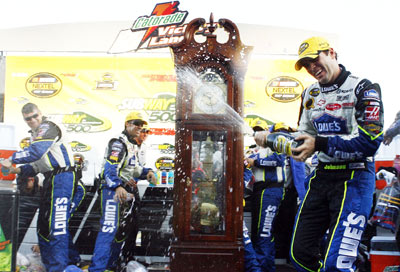 Jimmie Johnson sprays champagne on his crew after his victory in the NASCAR Nextel Cup Series Subway 500 in October 2006 in Martinsville, Va.
Chris Graythen/Getty Images for NASCAR

Racing a stock car might seem like a solitary sport, but it's not. NASCAR race teams include hundreds of people who work together to get a car and its driver ready for races all over the country. Here are the major players.

The owner of a team is like the president of a corporation. He (or she -- there are a few female owners) makes all of the hiring decisions and has ultimate control of the purse strings. In fact, one of the main jobs of the owner is to secure a sponsor, which will provide the bankroll necessary to put together a top-notch team and a winning car. That means owners must possess a strong business sense, regardless of their path to ownership. Some owners, such as Richard Childress, started as drivers. Others come to NASCAR racing after finding success in other ventures. Joe Gibbs, for example, earned three Super Bowl victories as the coach of the Washington Redskins before he started Joe Gibbs Racing in 1991.

The team manager is the owner's right-hand man. He oversees most of the day-to-day administrative duties that keep a team running. But don't think of a team manager as some sort of glorified secretary or administrative assistant. Most come to the job with years of experience in NASCAR racing, either as a crew chief or in some other important position.

The team manager works closely with the crew chief, who oversees all of the hands-on activities related to building and tweaking the car that will race on the track. These activities include designing the body, adjusting the suspension, tuning the engine and more. As you can imagine, a good crew chief must know a lot about how a car works, but he must also know how a car handles on a specific track, as well as the personality of the driver behind the steering wheel. Many crew chiefs have engineering degrees and helped design race cars in college.

A number of technical positions report directly to the crew chief. Some of them actually travel to the races, and others remain at the race shop to prepare for future races. Here are some of the more important "lesser" jobs on a NASCAR team: