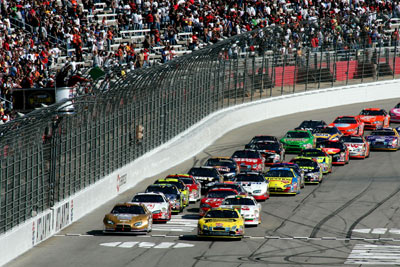 Race day begins with a sponsor's meeting, attended by fans, where drivers answer questions about the day and season ahead. It's an important meeting, but not as important as the driver's meeting. The driver's meeting is held two hours before the race and provides NASCAR officials an opportunity to review important rule changes and other issues that teams must remember throughout the day.

Thirty minutes before the race, drivers are introduced. They walk across the track, waving to the fans, and get into their cars. It's not as simple as sitting down and strapping on a seatbelt. There are several safety measures and specialized pieces of equipment that must be secured before a driver is ready to race. You can read about these measures in How NASCAR Safety Works.

Finally, the race is ready to start. The "gentlemen, start your engines" announcement tells the drivers that the show is about to begin. As the 43 cars come to life, the noise of revving engines fills the stadium. All NASCAR races begin with a "flying start," which means the cars are in motion when the race officially begins. Drivers line up in their positions behind the pace car and begin to follow it around the track. The driver of the pace car maintains a speed of about 70 mph in front of the pack. Then he pulls over, the green flag waves and the race begins.

Some people think NASCAR racing doesn't require a lot of skill because the cars simply drive around in circles. However, a typical race requires a great deal of strategy and an enormous amount of driver skill. Much of a driver's strategy depends on the characteristics of the track. All tracks have "grooves" -- the part of a track where the car's tires get the best grip. Some tracks have one groove; others have two grooves, a low groove and a high groove. On one-groove tracks, it's much more difficult to pass because a driver must leave the groove and drive on a part of the track that makes the car harder to handle. On two-groove tracks, it's much easier to pass because there's another available "sweet spot" on the track.

Either way, passing is one of the sport's most challenging moves. Good drivers know how to block their opponents, or move their cars from side to side to prevent another car from moving around. This makes passing on straightaways particularly difficult because it's much easier for a lead driver to look behind him in the rearview mirror when he's driving in a straight line. In the turns, however, it's a different story. Drivers have to keep their eyes forward during a turn, so this represents a great opportunity for a trailing driver to sneak around. Many drivers will ride right on the bumper of the car in front and patiently wait for just such an opportunity.