Reaction to NASCAR's Car of Tomorrow 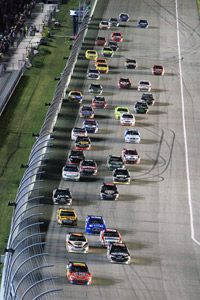 The competing cars are now more similar than ever, regardless of whether they're Chevrolets, Fords, Dodges or Toyotas.
Jerry Markland/­Getty Images for NASCAR

Despite being a big leap forward in driver safety, the Car of Tomorrow has been a hard sell to NASCAR's diehard fan base.

NASCAR fans have expressed their displeasure of the Car of Tomorrow on many levels. Many don't like the increased size of the car, the way it looks, the boxier shape, the reduced on-track speeds and the way the various competing manufacturers now run nearly identical machines. But the fans aren't the only ones complaining.

Drivers have criticized the car's handling. Many have complained that they have to re-learn their driving strategies at the same tracks they've always raced on. Many drivers say the car doesn't turn nearly as well as the old one, and that aero push -- an effect of airflow (or rather, lack of downforce in a draft situation) that seemingly pushes a trailing car towards the wall in turns -- is much worse than before, while the new car was supposed to solve that problem.

Dale Earnhardt, Jr., whose father's death in 2001 spurred development of the car, has been openly critical of it. "I think ... the car isn't a finished product," Earnhardt said in October of 2008. "Whenever they decide to move forward and evolve and let that car change and become a better race car, we will be ready to do that. But until then, we really don't have a choice in the matter" [source: NBC Sports].

Those who support the car say it has placed greater emphasis back on driver skill. Others say that protecting drivers' lives should be placed above an exciting race, and that a safer car is better for everyone involved in the sport. At the same time, Earnhardt and several other drivers conceded that the car is being improved gradually with each passing year. Plus, NASCAR has no plans of getting rid of it. It appears that the Car of Tomorrow is slated to be the Car of Today for a long time.