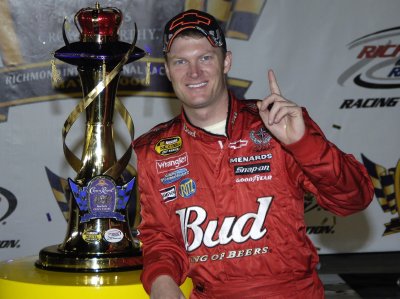 Perhaps no other NASCAR driver in history has  to fill than Dale Earnhardt Jr. See more pictures of NASCAR.
Wieck Media

Dale Earnhardt Jr. is both blessed and burdened with one of the most legendary names in stock car racing history. As the son of the late NASCAR icon Dale Earnhardt, Dale Jr. has inherited his father's instincts and hard-charging driving style. Because he is his father's son and the heir to a great racing legacy, he must operate under greater media and public scrutiny.

He then moved up to NASCAR's Busch Series, where he soon dominated with back-to-back championships in 1998 and '99. He also ran five NASCAR NEXTEL Cup events in '99 before moving to NASCAR's top series full time in 2000. Jr. quickly made a name for himself, capturing two wins and two poles during his rookie season.

Tragedy struck at the 2001 Daytona 500, when Dale Earnhardt Sr. was killed in a last-lap accident as Jr. crossed the finish line in second place behind teammate Michael Waltrip. Earnhardt Jr. stood tall in the face of this immense loss, scoring an emotional Daytona victory five months later at the Pepsi 400 and winning twice more to finish eighth in the 2001 standings.

The 2003 season saw Junior become a true title contender as he scored a record-breaking fourth consecutive win at Talladega on his way to a career-best third-place finish in the final standings.

In 2004, Earnhardt Jr. conquered Daytona again, winning the Daytona 500 on his way to a career-high six victories and a fifth-place finish in series points.

In spite of an intense personal schedule, Earnhardt Jr. maintains a laid-back demeanor and an ability to cut loose and have a good time. Recalling his days as a mechanic in his dad's Chevrolet dealership, he also enjoys working on his extensive specialty car collection.

Over the course of his racing career, Earnhardt Jr. has become a bona fide mainstream celebrity. In addition to the expected barrage of advertising and promotional appearances, he has appeared on TV talk shows, MTV and VH-1 documentaries, Hollywood movies, and music videos, as well as several popular magazines such as People, Maxim, Forbes, and Rolling Stone. He is a three-time-consecutive winner of the National Motorsports Press Association's Most Popular Driver award.

As a third-generation stock car racer, Dale Earnhardt Jr. represents NASCAR's southern past and its future. If his career thus far is any indication, the future is bright.