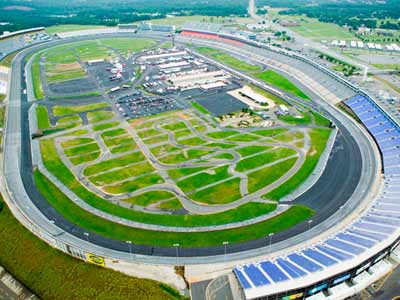 ­Stock car racing is a sport, full of rules and regulations, so­ you might conclude that all car racetracks are the same. After all, how different could they really be?

You might be surprised to learn that they differ as much as any road differs from another in the United States. To understand the differences of stock car racetracks, think of the size, surface and configuration differences of regular roads. Size, surface and configuration are the three major design elements that course designers consider when creating a new track. Some are short lengths while others are long. Some are paved and some are dirt. Most racetracks have an oval shape, but there are different types of ovals. In the end, deciding on configuration comes down to the space designers have to work with and what goals they have for their track.

­Let's start with an easy difference to understand -- size. The oval racetrack for NASCAR stock racing can be anywhere between a half mile (.8 km), found at the Bristol and Martinsville tracks, to 2.66 miles (4.2 km) found at Talladega. The tracks that fail to exceed one mile­ (1.6 km) are referred to as short tracks. The small tracks are where stock car racing began. When you leave the small track behind and start circling around a loop that exceeds the one-mile mark, you've entered a superspeedway.

Superspeedways allow drivers to reach faster speeds than short tracks because there is more length to build up speed [source: Economic Expert]. And since many races can cover as many as 600 miles (965 km), superspeedways cut down on the number of laps a driver must complete for long-distance races.

Tracks also differ in their surface. Some tracks are dirt, while others are paved in asphalt or concrete. Dirt changes more rapidly than pavement, so cars must be specially designed for the instability of dirt tracks. Dirt drivers must consider grip, traction and suspension more so than pavement drivers must [source: Huneycutt]. Drivers can go faster on paved surfaces because they do not need to worry about the instabilities associated with dirt. That's why NASCAR's tracks are all paved these days.

When we say that tracks are usually oval, it does not mean they're a standard oval shape. Some ovals can be perfectly even on both sides, or some are egg shaped. There is also the possibility of a tri-oval track, a d-shaped oval track and a quad-oval track.

­Since the tracks are typically oval, a designer must take special consideration in designing the turns. If the track were completely flat, cars would have to slow down drastically when making their turns so that they didn't spin out or skid off the track completely. Banking, which refers to the upward angle design of the course, answers this problem, helping drivers make an easier turn. A steeper incline allows drivers to make a faster turn [source: Nascar Gambling Odds]. Looking at a track, you can usually see how the inside lanes are lower than the outside lanes. Banking is measured in degrees of incline. For example, on NASCAR tracks, banking ranges from 6 degrees at the tri-cornered Pocono track to 36 degrees at the "big concrete bowl" of Bristol [source: Harris].

Though there are a number of basic similarities, in the end the layout and composition of each stock car track depends greatly on the individual league that governs it. Each league has its own rules and regulations that affect the track. Now you are equipped with the knowledge of how stock car racetracks differ, so if anyone ever says, "they're all the same," you can correct them with an informed response.

For even more information on stock car racing, check out the links on the following page.

Carefully calculated measurements are needed when designing a safe and successful racetrack. And having someone on the design team who has first-hand experience circling the track can be helpful, too. That's one of the reasons Riverside Motorsports Park, LLC, recruited NASCAR veteran Rusty Wallace to consult with their design team. His widespread experience should bring a helpful perspective to the idea table [source: Rusty Wallace].