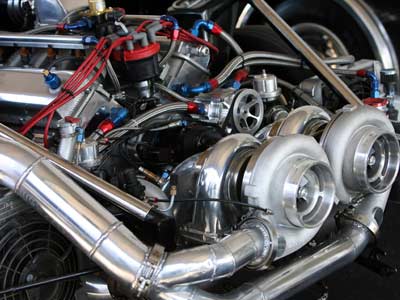 Telemetry uses measurements of car performance during a race or trial to properly tune the car for optimum performance.
iStockphoto.com/Rutryin/StarzPhoto

­If you think stock cars are fast, you should look at their onboard computers.

Telemetry is the remote collection and measurement of data. It usually involves some sort of wireless broadcast. Of course, remote data collection is important in many fields -- defense, medicine, even agriculture. But it's rarely more exciting than in stock car racing.

A stock car has a computer that collects and broadcasts the car's vital statistics to a central computer [source: NASCAR]. The broadcast uses a wireless radio -- so it's basically a souped-up PDA that automates messages from the driver.

­What happens then depends on the purpose of the central computer. If it belongs to the pit crew, auto technicians coordinate the data with what the driver is telling them verbally about the feel and handling of the car. They can anticipate problems and accommodate changing track conditions. Clearly, information is power, which is why this use of telemetry is limited to vehicle tests. It's banned from NASCAR races.

Telemetry data also enhances the live broadcasts of auto racing events. For NASCAR broadcasts, up to eight radio receivers are installed at key points around the track to collect data from the speeding cars. Each receiver gets the car's wireless broadcast. Then, a central computer (usually, in the on-site TV production van) collects racing statistics five times a second -- from every car on the track [source: Afar].

That's how TV producers get what one producer calls "the most complicated graphic to produce in television" -- the virtual dashboard you see on the screen [source: Meserve]. It's also how NASCAR gets the information for its PitCommand service [source: NASCAR].

What Stock Car Telemetry Does

The first step in any kind of telemetry is gathering information. Naturally, that comes from the car.

The car's onboard computer, a proprietary tool called a Pi System, collects information, such as speed, RPMs, brake position, temperature and location. A Pi System works more or less like an airplane's black box -- except in a race car, the system consists of two black boxes [source: Kushner].

­The boxes sit on the vehicle's floorboard. They're connected, via transducers, to critical sites throughout the car -- the steering wheel, shocks, pedals and so on. Sensors measure every conceivable variable -- temperature, movement, voltage. All the information is stored in the boxes.

For real-time broadcasts, cars have an antenna that sends info to computers as the driver circles the track. Telemetry also uses differential GPS, the same system used by the U.S. Coast Guard, to track the relative locations of cars.

A company called Sportvision -- the same people who show you the digital first-down line in football broadcasts -- is responsible for turning this information into the graphics you see in live broadcasts. They use a complicated combination of topographical track maps, JavaScript, wireless modems, graphics software and fiber optics [source: Meserve].

Even though computers have brought about incredible improvements to the vehicles, and teams now work with unprecedented expertise, NASCAR has a long tradition of trusting human instinct over technology. Before a race, as many as eight inspectors might go over a car from tip to stern, looking for hidden sensors [source: Kushner].

What that means is that the human driver is still supreme in stock car racing. Says Jeff Gordon, "When I see that green flag, I'm the on-board computer. I'm the telemetry" [source: Kushner].

So what happens before the green flag? Read on to learn how racing teams test and prepare their vehicles.

Computers are delicate things. Did you ever try working out while using a first-generation MP3 player -- one that used a hard drive? Maybe you remember how it jammed or shorted out if you ran too vigorously on the treadmill. You were probably going somewhere between 6 mph and 10 mph. Now imagine what could happen at 200 mph. That should give you an idea of how carefully a stock car's computer must be protected [Source: Afar]. And it's not just a question of the computer's safety, either. In 2001, a battery in Robby Gordon's telemetry box jostled loose and erupted in flames on his floorboard, ending his participation in the race [source: Parsons].

Before a race, a NASCAR team has a limited amount of testing time on the track -- five two-day tests, and five one-day tests. So the team wants to use that time to gain as much information as possible. It might install as many as 60 sensors on the car [source: Wise]. The team will check several things, such as:

An antenna on top of the car broadcasts the info back to the pit crew's computers. Or, the car's own system collects the information so that engineers can download it later using a relatively familiar piece of technology, a laptop running Windows [source: Kushner].

­The team, which consists of engineers and automotive technicians, coordinates test information with wind tunnel data about the car's air resistance, both alone and in combination with other cars (see How Stock Car Drafting Works). The team members also gather data about the track surface and conditions so that they can tune the car to that racecourse.

Of course, all this happens before the actual race. In the race, although the pit crew might have a race engineer, communications between the driver and the pit crew are limited to analog technology.

And that might be a good thing. Telemetry is allowed in Formula One races, and it is part of why those cars and teams are so astronomically expensive. In 2005, a Formula One team might spend around $200 million, a sharp contrast to the $15 million spent for a NASCAR team [source: Wise].

More importantly, NASCAR feels -- and many fans agree -- that too much telemetry can take the fun out of racing. "Keep our athletes athletes," is how Nextel Cup series director John Darby puts it [source: Wise]. As athletes in every sport rely on increasingly sophisticated technology, it's likely that eventually Darby is going to have to be more specific.

To learn more about stock car racing and related topics, visit the links on the next page.

End of an Era

Though he's grateful for the efficiency of telemetry, Winston cup series owner Jack Roush feels that the era of technicians who trusted their instincts is gone. Just how far gone? Roush has said, "To where nobody can really take care of the race car themselves. We're today resigned to having specialists in different areas" [source: Maloof]

What were the stock car tire wars?
Why is it so hard to understand the NASCAR penalty system?
How Dirt Stock Car Racing Works