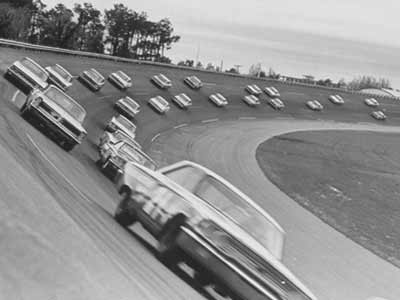 ­­Born in the days of Prohibition, stock car racing soon proved to be popular with the masses. It began to spread in the 1920s and by the late '40s was a common source of entertainment. The National Association for Stock Car Auto Racing (NASCAR) formed in 1948 to give congruency to the many leagues that had sprung up around the country. Today, stock car racing is a well-governed sport.

­NASCAR is the No.1 spectator sport in the United States and the second most popular televised sport broadcast worldwide [source: NASCAR]. It continues to grow in popularity, and roughly 40 percent of its fan base is now female [source: Wise]. Not many professional sports can claim that women make up almost half of their audience.

Stock car racing was originally a competition between cars that hadn't been altered from their original factory build. But as times changed and technology advanced, the sport evolved. These days, the cars still have a semistock build, but they're a bit different under the hood than the cars on your local dealer's lot.

NASCAR has done what it can to maintain the integrit­y of the original sport. When the "aero wars" of the '70s put two automotive giants consistently in the winner's circle, NASCAR stepped in to level the playing field by placing restrictions on all cars. The organization has also made other changes for safety reasons -- each automotive and technological advance made the cars faster, but with increased speed came increased danger.

­As you read on, you'll learn more about the beginnings of stock car racing and see how it has evolved into the global force it is today.