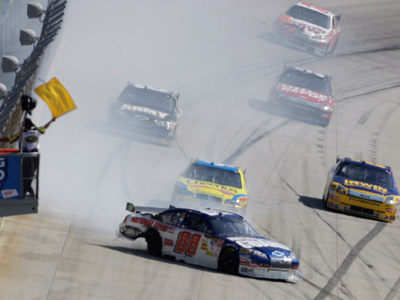 A gentleman's agreement -- a contract with no need for forms, files or signatures, enforced solely by trusting in the honor of the other parties to the agreement -- seems like a strange way to govern a sporting event, doesn't it? After all, every professional sport relies on a written rulebook, right? But the world is full of unwritten rules, too, and even though they aren't codified in any book of laws, there are still consequences if you break them. The world of sports, which certainly has plenty of written rules, has its share of unofficial rules as well. Don't run up the score on a struggling opponent. Pass the ball to a teammate when he has the chance to break a record. Violate these rules, and the results won't be measured in points or penalty minutes, but your peers will make sure you feel them just the same. Angry words in the post-game press conference might be the least of your worries. Some transgressors spend months looking over their shoulder on the field, court or track just waiting for payback.

­­This brings us to NASCAR's gentleman's agreem­ent, a rule that governed the behavior of all the drivers in NASCAR's top racing series for almost 30 years, despite never being written into a single rulebook. What was the agreement, and why is it no longer in effect? Are there simply no gentlemen in racing anymore? Or did something else make it obsolete?

Racing to the Line in NASCAR

NASCAR's gentleman's agreement came about due to some complexities in racing rules, and some technological limitations that couldn't be overcome in the 1970s. For most of racing's history, a car's position on the track relative to the other cars was noted by human scorers, who watched for the car each time it crossed the start/finish line. Whenever a caution flag was thrown due to a crash or some other problem on the track, scoring was noted the next time the cars crossed the line following the throwing of the caution. That meant that it was in a driver's best interest to continue racing to the line, even though there may have been damaged cars on the track. This obviously created a safety concern, not only because of the chance of further collisions, but because safety crews had to wait for everyone to reach the line before they could approach an on-track accident scene. If a driver was injured in a crash, the delay could literally be a matter of life or death.

Racing to the line was vitally important for a car that was a lap down -- that is, the leader had passed him, so he had completed one fewer lap than the lead cars. Getting a lost lap back is crucial if a driver is to have any chance at a decent finish, so a lapped car near the front of the field would race hard to beat the leader to the line in order to get back on the lead lap.

Despite the inherent danger, NASCAR never changed the "race back to the line" rule. Several of the top drivers in the 1970s discussed the problem and came up with their own solution -- the gentleman's agreement. Richard Petty, Buddy Baker, Cale Yarbrough and David Pearson decided that everyone on the track would slow down and hold their positions whenever a caution was thrown [source: Cross]. Even though it was perfectly legal under NASCAR rules to pass other cars before they got to the start/finish line when a caution flag waved, they simply agreed not to. To accommodate lapped cars that were desperate to get back on the lead lap, the leaders would often slow down a little more to let one lapped car pass. Because these drivers were the most successful and respected NASCAR competitors of the era, this idea worked. "They all went off on their own and made an agreement: When the caution comes out, let's throw up our hand, and everybody should whoa up at the same time," said NASCAR President Mike Helton in a 2003 interview. "That's the gentleman's agreement. It's been working pretty well up until recent years."

Even though it was never written down in NASCAR's bylaws, the agreement remained in place for decades. Many years after the original gentlemen had retired from racing, drivers still didn't race to the line. But in 2003, something changed.

It started at the road course in Sonoma, Calif., when Robby Gordon passed Kevin Harvick during a full-course caution and went on to win the race. Gordon was lambasted by the other drivers in the press and in person, too, but he didn't break any official rules -- the win counted. Jimmy Johnson did it at Chicago when he passed Michael Waltrip, and at that point, the flood gates were opened. NASCAR realized they needed to step in. First, Helton issued warnings, asking the drivers to police themselves. That didn't happen. The reason is anyone's guess, though racing fans have plenty of theories. A popular idea is that the influx of corporate sponsorship money into NASCAR raised the stakes too high. The chance to gain a position or win a race was worth far too much money for drivers to pass up. Others claim that today's drivers lack the sense of racing tradition held by the previous generation. One thing is for sure -- if you want to stir up a heated debate among race fans, just mention the gentleman's agreement.

We may not be able to explain the cause, but we can tell you plenty about the effect of the agreement dissolving. NASCAR changed the rule, and they did it with the help of some new technology.

One of the strangest things about the whole gentleman's agreement controversy is that it could have been easily averted by a simple rule change. Instead of scoring cars' positions at the start/finish line after the caution is thrown, NASCAR could simply revert to the last legally scored lap. That is, if the leader completes lap 49, then the second-place car makes a pass and takes over the lead, and then a caution is thrown before they complete lap 50, the pass and lead change are undone. Track positions would revert to where they were as of lap 49. True, having a dramatic pass undone by a caution can be frustrating to fans and drivers alike, but it happens rarely enough at the thousands of local short tracks across the United States, where the rule has been in use for decades.

On the other hand, in today's NASCAR, where multi-car teams are the norm, cheating and collusion would be all too tempting. One teammate might just happen to stall or spin on the same lap that another teammate was passed.

During the 2003 racing season, NASCAR put in place a new rule: each driver's position would be "frozen" as soon as a caution was thrown. The exact position was determined by transponders in the cars and receiving loops positioned around the track. We'll explain the transponder system in more detail in a moment. This rule solved the "racing back to the line" problem -- no one had any incentive to race to the caution, since they couldn't gain any positions. What had been an unwritten rule was now official.

There was a problem with freezing the field, however. It became almost impossible for a driver to regain a lost lap. Having more cars on the lead lap makes for more interesting races and is often used as a gauge of parity within a racing series, so it was in NASCAR's best interest to give drivers a chance to get their laps back. Therefore, they instituted what many people refer to as the "Lucky Dog" rule. It is also known as the Free Pass, but the NASCAR rulebook terms it the Beneficiary Rule. This rule allows the lapped car with the highest track position to regain a lap whenever a caution is thrown. That is, if three cars are all one lap down, during a caution the car that is ahead of the other two on the track will get the lap back.

There are no limits on how many times a car can use the Beneficiary Rule in a single race, or how many laps down a car can be and still use it. Several drivers have won races after using the rule, and in one strange case, Kyle Busch used it five consecutive times to come back from being five laps down. He lost the laps due to mechanical troubles at a road course. Because road courses are longer and slower tracks, lapped cars are rarer, and there weren't any at the time (other than Busch). A series of caution flags allowed Busch to get all the lost laps back. There are many critics of this rule, but so far, it remains in place.

The transponder system is the key to determining every car's position on the track at the exact moment a caution is thrown. Each car carries a radio transponder that gives off a short range radio transmission of a seven-digit code number. By NASCAR rules, the transponders are mounted on the fuel cell. At varying points around a track, wire loops are embedded about a foot (0.3 meters) below the track surface. These loops receive the transmission from the transponder. NASCAR can also deploy free-standing transponders around a track if they want higher resolution. The loop immediately sends this information, via a wireless network -- with redundant fiber optic connections, just in case -- to a computer system that logs each car as it passes each loop and at what specific time. This system can be used to track where cars are in relation to each other on the track and it can also record lap speeds. The information is even sent to laptop computers used by the pit crews, so they can see scoring and timing data in real time.

Trying to figure out where everyone was on the track using human spotters would be incredibly difficult, and using video replay would be time-consuming and confusing. While the new rules may not be a perfect fix in the absence of the gentleman's agreement, transponder technology definitely makes things a lot easier.

For more information about NASCAR and other NASCAR-related topics, follow the links on the next page.

The "race to the line" agreement isn't the only unwritten NASCAR rule to come and go. Two of NASCAR's most famous tracks, Talladega and Daytona, have a yellow line demarking the bottom of the legal track. There is pavement below the line, but passes there aren't legal. There was one exception to that -- an unofficial rule that basically stated that on the last lap of a race, anything goes. Fair enough, until one driver made a pass below the line to win a race. This maneuver was perfectly in line with the unwritten rule, but the win was disallowed. NASCAR then issued a written rule eliminating the "anything goes" tactic.

Recently, NASCAR team owner Jack Roush has proposed a new gentleman's agreement, this one related to teams testing their cars. It costs a lot of money to test cars in between races, and NASCAR wants to bring team costs down. However, every time they try to create rules that limit testing, teams find ways to circumvent them, and that ends up costing even more money. Roush wants a gentleman's agreement among owners to voluntarily limit testing.