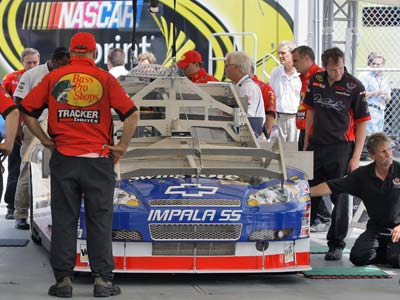 ­Before the throngs of race fans show up at the track, NASCAR officials are busy looking over each entry with a fine-toothed comb. Actually, they use a set of highly technical templates to determine whether the cars are within predetermined specifications.

Now that the car of tomorrow (COT) is used exclusively in NASCAR competition, the inspectors use just one template to inspect the cars at the track. As mentioned earlier in this article, NASCAR formerly used several templates to measure the cars. With the COT, NASCAR uses a single template which is actually 19 individual templates welded together into one large template that fits over the entire car. Known by those close to the industry as "the claw," the large template fits over the car and measures everything at once. Like any car that rolls off an assembly line, each stock car that passes through the inspection station must fit within the tolerances of the template. NASCAR officials check each specific point and look for any discrepancies. If they find that a car is not within the claw's grasp, so to speak, they allow the team to take the car back to the garage area and rework the sheet metal on the body until it fits the template. That doesn't mean the teams don't get punished. NASCAR reserves the right to penalize a team if it finds the car to be out of specification. Those penalties usually don't come down until the following week, after the race. In some instances, NASCAR will impound a car and force the team to use its backup or second car.

NASCAR looks for areas where teams may have manipulated the sheet metal or ride height in order to gain an aerodynamic advantage. The claw template is designed to find those areas. As far as mechanical inspections, officials check the fuel tank, engine and suspension in order to search for any areas where the car may be out of specification. NASCAR rules are very clear regarding engine and fuel tank displacement or size. Suspension settings are no different -- NASCAR determines what's allowed and what is not.

Also new with the COT is the presence of a rear wing. If you've ever watched a Sprint Cup race, you may have noticed all the wings are black despite the bright colors each car adorns. That's because NASCAR doesn't allow teams to paint or place decals on the rear wing. In fact, NASCAR is very strict regarding the wing's height and size. In fact, before every racing weekend, NASCAR issues each team a wing to be used during the race. That doesn't mean that teams don't attempt to manipulate the rear wing on the car. The brackets that hold the wing in place are installed by each team at its own discretion so there's still plenty of room for error regarding wing height.

Restrictor plates -- metal plates placed over the air intake to restrict air flow -- are used only at Talladega and Daytona superspeedways and these are also distributed by NASCAR. Officials actually place the plates on top of the manifold and observe the team as they bolt the carburetor on top of the engine. To date, no team has been accused or found guilty of tampering with a restrictor plate. Doing so would certainly bring with it a severe penalty.

Let's move to race day and find out what goes on before and during the race. This is where you'll see that an inspector's job doesn't end until the last car hauler heads back to the shop.