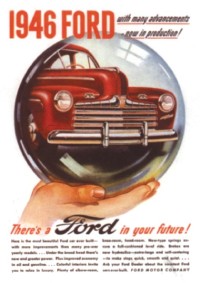 Ford had a number of leftover 1942 body parts that went into 1946 Ford models. Henry Ford II got the first postwar car into production, and the very first one -- a white Super DeLuxe Tudor sedan assembled on July 3, 1945 -- went to President Harry Truman. Alas, only 34,439 more were assembled during the 1945 calendar year, but it was the quick return to production that put Ford ahead of Chevrolet.

However, there was no end of problems with the War Production Board, which controlled output and materials supplies, and the Office of Price Administration, which put many controls on the price of parts and cars. Henry Ford II claimed that he was losing $300 per car because he couldn't achieve volume production, and indeed the company was hemorrhaging about $10 million per month at one point.

The pent-up market created an unprecedented demand for new cars. Ford's advertising agency, J. Walter Thompson, created a brilliant teaser campaign: "There's a Ford in your future." Until July, it showed only parts of the "new" Ford in a crystal ball; then there a publicity blitz culminating in "V-8 Day" on October 26, 1945. More than a million Americans flocked into showrooms for the public introduction, and nearly half a million promptly placed their orders.

One of the more attractive 1946 Ford models was the Super DeLuxe coupe sedan (also sometimes called the sedan coupe).
PIL

Outside trim was nearly identical to the 1942 except for the new horizontal grille consisting of three stainless steel bars below a massive, chrome-plated pair of Ford "wings." The grille sported red striping within ridges in the metal. The decklid, meanwhile, carried two horizontal strips of stainless below the license plate, and color selections were greatly improved over those of 1941-1942.

One big difference for 1946 was the interior. While the DeLuxe looked pretty much like the 1942 in drab browns, the Super DeLuxe looked striking in navy blue and gray. The dash plastic over a navy-colored dash was pearl gray with red striping.

The instrument numerals were red on a black field with a chromed speedometer needle and clock hands. (An electric clock was standard on the Super DeLuxe beginning in 1942.) When one turned on the headlights at night, the gauges glowed beautifully with the red numerals backlit and the edges of the chromed needles outlined in white light.

Among Super DeLuxes, the sedan coupe was the third most popular model.
PIL

Considering the car's price, the quality of the upholstery, its fit, and the fit and quality of the other interior/exterior trim was impeccable. So was the finish. Much of the detailing was done by Willis P. Wagner, later demoted to the Ford Truck Division when George Walker took over Ford styling in 1949.

Not until the 1954 Crestlines and 1955 Fairlanes would any Ford be this well detailed. And not until Ford's total quality control program of the early 1960s would overall Ford workmanship be this high.

All Ford body styles were carried over from 1942, although jump seats were no longer available in the coupe. A new model, the Sportsman, boasted wood trim, much like the 1946-1948 Chrysler Town and Country and the 1946-1948 Nash Suburban. Cynics would say that it was little more than a promotional scheme.

For more on the 1946 Ford Sportsman, see the next page.