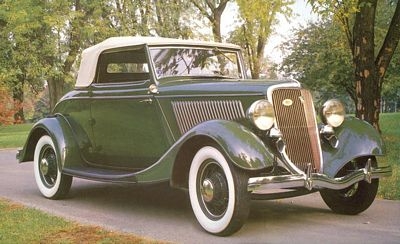 The 1934 Ford DeLuxe Roadster was popular among the police and crooks for its explosive speed. See more classic car pictures.
©2007 Publications International, Ltd.

"Changes in the appearance of the attractive car include new hood, radiator and grille lines, a new instrument panel, and luxurious new upholstery treatment," Automotive Industries reported. "The curve in the grille has been eliminated and there is a new ornament surrounding the radiator cap. Hubcaps and the spare tire-lock cover are also new, as is the V-8 insignia on the grille."

Inside, the engine-turned instrument panel insert was discarded in favor of a plain painted dash of similar layout.

The new dual-downdraft carburetor on the 1934 roadster increased the HP by 10.
©2007 Publications International, Ltd.

New accessories for 1933 had included a radio, dual wipers, and heater. For 1934, Ford added a touch of Lincoln-style class with a beautifully cast radiator cap in the image of a running greyhound. And for the first time, body-color fenders were offered at no extra charge.

The Detroit Lubricator carburetor was replaced by a better-engineered Stromberg dual-downdraft type. This yielded 10 extra horses, bringing the rating of the flathead V-8 to 85 bhp.

Hubcaps and the spare tire-lock cover were new additions to the 1934 Roadster.
©2007 Publications International, Ltd.

Prices ranged from $505 for the two-passenger coupe to $660 for the woody station wagon. The DeLuxe two- to four-passenger roadster, complete with rumble seat, listed at a modest $525.

With all the good press and the company's renewed interest in promotion, sales of the dandy 1934s began to take off. Among the new model's earliest champions were police officials who used its explosive speed to chase crooks -- and crooks who stole new Fords to outrun the law.

For 1934, the curve in the grille was removed and a new ornament surrounding the radiator cap was added.
©2007 Publications International, Ltd.

Infamous bank robber Clyde Barrow was one unabashed admirer who took time from his criminal pursuits to praise V-8 virtues in a letter sent to a surprised Henry Ford.

It said, in part: "I have drove [sic] Fords exclusively when I could get away with one. For sustained speed and freedom from trouble the Ford has got ever [sic] other car skinned and even if my business hasen't [sic] been strictly legal it don't hurt enything [sic] to tell you what a fine car you got in the Ford V-8."