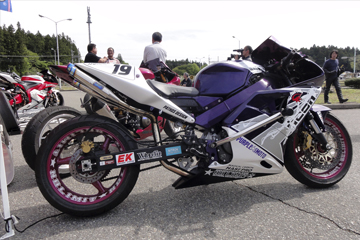 A stretched sportbike will often handle differently and go much faster.
flickr.com/photos/dacheket/

Extending the frame of a motorcycle — or specifically a sportbike, built for acceleration, speed and cornering — is sometimes done for purely aesthetic purposes. A stretched bike looks a lot different from its factory design, and the look is popular in the aftermarket motorcycle community.

But for some riders, stretching a sportbike has a purpose beyond looks. Stretching a bike's frame dramatically affects the way it's ridden. The mechanical components might stay the same, but a stretched sportbike handles differently and requires the rider to adjust positioning. Sounds like it could be kind of a pain, doesn't it? And expensive? So why would anyone significantly modify the frame of a perfectly good bike?

Because it helps the bike go faster for racing, assuming it's done right. More specifically, it doesn't make the bike faster from an increase in horsepower or torque, but by changing how the bike interacts with the road and the driver.

Stretching a sportbike lowers its stance, which can be further lowered by additional suspension modifications. A lowered stance improves traction, meaning less power is wasted and more power is available to push the bike forward. Extended swing arms — the main part of the rear suspension, holding the rear axle — help prevent the bike from going into wheelie position on takeoff, which can happen unintentionally.

While some riders like to modify their own bikes, some experts say is best for an experienced shop to do the work, because there's a lot of room for errors. For example, picture the tubes — known as forks — at the front of the bike that hold the front wheel. It's possible to swap those out for longer forks, which will achieve the look some riders are going for. But for racing, it's not a good idea. It affects the rake (or angle) of the bike's steering axis, which needs to be optimized for racing. This can change the way the engine and transmission interact with the rest of the bike, possibly making the bike dangerous and inefficient. It also can change the way the rider mounts the bike and balances on it, which can make the bike slower (by increasing drag) and more dangerous (by throwing off the rider's balance).

In other words, adjusting just one part of the frame is a bad idea. The effects of the change have to be considered, and then other changes made elsewhere. Here's an alternative to stretching: buying or building a completely custom frame, designed for big-picture perfection.