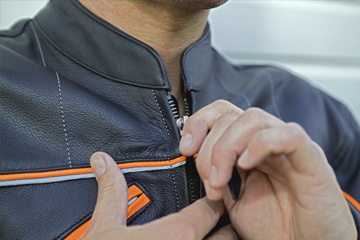 When it comes to safety gear, motorcycle jackets are only one part of the equation.
Howard Kingsnorth/Getty Images

Though many safety experts insist that wearing a motorcycle jacket can save your life in a crash, it's difficult to find research pinpointing the effectiveness of jackets on their own. That's because riders who wear jackets also tend to wear helmets, which are known to be crucial to preventing serious or fatal head injuries. An Australian study published in 2011 studied groups of injured riders in three groups: those who wore protective jackets and pants, those who wore just a protective jacket, and those who wore no protective gear. The study concluded that the riders who wore full and partial protection suffered less injury during the crash and were closer to full recovery six months later than the unprotected group [source: de Rome et al].

But while data on whether a motorcycle jacket will save your life may be inconclusive, there's still plenty of evidence it can help protect you in a crash. Studies also have shown that certain characteristics make a motorcycle jacket more effective. Don't worry about brand or fashion when you're looking for a motorcycle jacket, because those aren't life-saving properties. Focus on the jacket's material, built-in armor or accommodations for protective gear you add later, fit and color. A good motorcycle jacket increases the rider's visibility to other vehicles on the road, which has been demonstrated to save lives. High-visibility yellow, orange and red jackets make riders more noticeable to motorists [source: Dying To Ride]. Some jackets include built-in armor to protect vulnerable joints and bones, along with skin and muscle, while others are designed to work well with add-on pieces, such as elbow pads and spine protectors. Leather is the most common material for a motorcycle jacket because it's tough and readily available. For riders who avoid leather for ethical reasons or prefer a lighter-weight jacket, there are plenty of synthetic alternative materials.

Despite a lack of hard data that proves a motorcycle jacket alone can save lives, it's clear that a high-quality, properly fitting motorcycle jacket is a crucial piece of safety gear. It can reduce the likelihood of an accident and reduce the severity of injuries sustained in a crash.

10 Notorious Motorcycle Gangs
Do loud pipes really save lives?
How the Hyanide Works