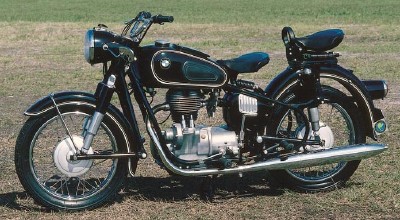 The 1965 BMW R-27 motorcycle was one of the first BMW bikes to use an Earles fork. Instead of a traditional telescopic front end, an Earles fork resembles a swingarm rear suspension in design.

Starting out as a builder of aircraft during World War I, Bayerische Motoren Werke turned to motorcycles after the hostilities ceased. Despite the change in products, the company's circular blue-and-white logo -- which depicts spinning propeller blades -- was retained, and remains to this day.

BMW motorcycles have long been synonymous with horizontal twins and shaft drive, which were used on the very first examples. However, the company also produced smaller single-cylinder machines for many years and added inline threes and fours in the 1980s.

Early BMWs had stamped-steel frames, and the company was among the first to use telescopic forks starting in 1935.

During World War II, Germany purchased thousands of V-twin sidecar-equipped outfits from BMW, and the motorcycle's design prompted the U.S. to commission Harley-Davidson and Indian to build near copies, though only a couple thousand were produced and only a handful saw service.

BMW's first shaft-drive singles arrived in 1925 to satisfy the demand for smaller bikes. Like other BMWs of the day, they used a trailing-link front suspension and rigid frame, switching to telescopic forks in 1935 and a plunger rear suspension in 1938.

In 1955, BMW replaced its telescopic front end with an Earles

fork, which resembles a swingarm rear suspension in design. In single-cylinder 250-cc form, this model was designated the R-26.

Most mechanical components were carried over from the BMW R-26 to the R-27 shown here. This example has individual "swinging saddles" in lieu of the standard two-up seat, the former supposedly providing more rider and passenger comfort.

Though it grew in popularity throughout its seven-year production run, the R-27 would be dropped after 1967. BMW would not offer another single until the early 1990s, when an Italian-built on/off-road model powered by a Rotax engine was introduced. 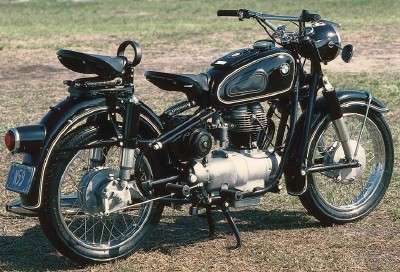 The 1965 BMW R-27 motorcycle featured most of the mechanical components of the company's R-26 model.

The R-27's swingarm pivoted off a rigid fork.
This was BMW's last single-pot engine until the 1990s.
Coil springs cushioned the passenger from impacts.
This R-27 has the standard one-piece saddle.
The Earles-type fork provided a very smooth ride.