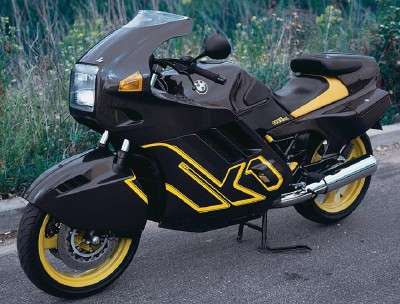 Clad in futuristic plastic bodywork from stem to stern, the 1990 BMW K-1 motorcycle looks more like a design study than a production model from the Black Forest. Based on the "Racer" design mockup done by BMW in 1984, the K-1 represented BMW's desire to appeal to a more youthful market.

The mechanicals found beneath the seven-piece skin were also a departure from BMW's standard fare.

A 1000-cc, fuel-injected, sixteen-valve, water-cooled, inline four-cylinder engine propels the K-1 to a top speed of nearly 150 miles per hour. Final drive is handled by BMW's usual shaft, which is housed within the massive, bright yellow, single-sided swingarm.

In front, four-piston calipers grip dual floating rotors. The rear wheel has its own disc brake, and the whole system is controlled by an ABS system to ensure safe stops even under less-than-ideal braking conditions.

Intended to compete in the sport-touring segment of the market, the BMW K-1 is blessed with a large, comfortable seating area. The tail section of the bodywork can be removed to expose the passenger's pillion hiding below.

Small storage compartments reside on each side of the tail piece, and each one has its own locking cover.

Through the 1980s, BMWs had been unique in design but conservative in execution. With bikes like the K-1 ringing in the '90s, BMW tipped its hand that future offerings would display a decidedly different side of its Teutonic nature.

Go to the next page to see more pictures of the 1990 BMW K-1 motorcycle. 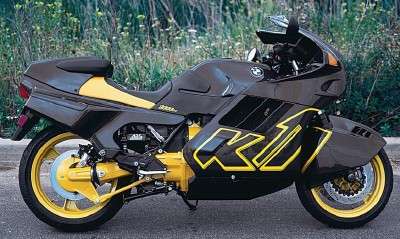 In an attempt to grab more of a younger audience, BMW developed the sleek and sporty K-1 motorcycle.

Even the K-1's instrumentation has a futuristic look.
An ABS sensor is under the edge of the front fender.
"Toothed" trigger wheels ride inside the brake rotors.
A driver's backrest is incorporated into the tail section.