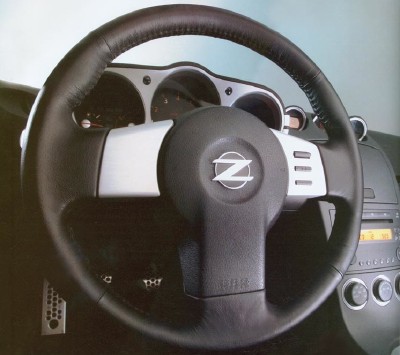 The 350Z steering wheel had varying levels of leather and cushioning, to fit the hands of the driver.
©2007 Publications International, Ltd.

With the driver comfortable, secure and properly located, the next critical points of contact with the vehicle would be the 350Z control interfaces: the steering wheel, pedals, and shifter.

The steering wheel was 14.5 inches in diameter and was built-up from a lightweight, rigid cast-magnesium core, some 18 percent lighter than the steering wheel in the 1990-1996 300ZX. An extra layer of foam cushioning under the leather wrapping helped increase the grip.

The steering wheel was shaped to fit the drivers' hands, with varying thicknesses of leather, foam cushioning, and the urethane underneath the rim. A small, new-design air-bag module allowed for a trim, sporty appearance, further embellished by genuine aluminum finish on the side spokes.

In keeping with the Z's design theme, the pedals of all but the base model featured brushed-aluminum faces studded with rubber inserts. The clutch, brake, and accelerator pedals were spaced evenly and aligned on the same horizontal plane to facilitate heel-and-toe driving.

Nissan engineers worked to balance the feel and travel of each of the pedals for a satisfying driving experience. In keeping with the short-stroke feel of the manual-transmission shifter, clutch-pedal travel was reduced by one inch and a single-diaphragm vacuum brake booster was used for a firmer pedal feel.

The pedals in the 350Z were spaced in such a way as to facilitate heel-to-toe driving.
©2007 Publications International, Ltd.

The 6-speed manual transmission's short-throw shifter itself was a stout, very rigid, direct-acting instrument. Its grip, or knob, was the product of considerably more thought than most.

Rather than the usual solid, leather-wrapped shape found on most stickshifts, the 350Z's knob was padded on its longitudinal plane, solid in the horizontal plane.

What this meant was the driver would experience a soft feeling and less "gear shock" when engaging each gear, but a precise, solid feeling when moving across the gate. The result was an immensely satisfying shifter to work up and down through the gears. Reverse was protected from accidental engagement by a guide plate that blocked access to the gear unless the shifter was pushed down in the neutral position.

The manual transmission (shown) had a direct-feeling short-throw linkage. The automatic transmission had a separate gate for manual shifting.
©2007 Publications International, Ltd.

Some Z buyers preferred the convenience of an automatic transmission, but didn't want to give up control. There are times when a driver wants to be in charge of shift points, use the transmission's lower gears for engine braking or maybe just keep the car on a short leash through a tricky set of turns.

The Z's automatic transmission allowed such techniques. Called M-mode and similar in function to the state-of-the-art Tiptronic® system, the driver could access a parallel gate by first moving the gear selector to the D position, then to the right. In the M-mode, sequential upshifts occurred by tapping the shifter rearward, downshifts by tapping forward.

Unlike some other systems, the transmission would not upshift in this mode unless the driver tapped rearward. Therefore, inattentive drivers could visit an automatic-transmission Z's rev limiter if they stayed in the throttle beyond the engine's 6600-rpm redline.