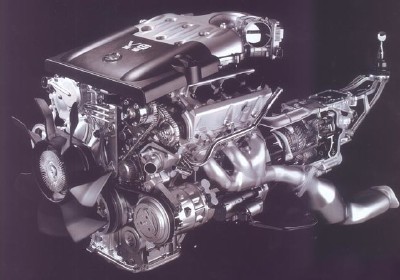 The heart and soul of any sports car is its engine. For Nissan's most-famous series, that has traditionally meant six cylinders; a high-strung, peaky four cylinder would not do for the 350Z engine design.

The 350Z engine design needed to offer both good low-end torque for powerful acceleration from a standing start and excellent top-end breathing for high-speed merging and passing. Around-town drivability was important. No lumpy cams or hair-trigger turbos would do.

To meet these demands, Nissan wisely chose to power the 350Z with the third-generation version of its VQ V-6. Aside from the 350Z, the VQ has been used in the Nissan Altima, Maxima, and Pathfinder, as well as the Infiniti I35, G35, and QX4. About half a million VQ engines are assembled annually at Nissan's Iwaki Engine Plant, a factory that's been called the most-advanced of its kind in the world.

Nissan began planning for a front mid-ship application of this engine in 1996. From the start, the goal was to achieve high performance in a compact package. The engine would have to be narrow to work in a longitudinal orientation with multi-link front suspension. And it needed to be short so its center of gravity could be located aft of the front-wheel centerline, front mid-ship style, and not intrude unduly into the passenger compartment.

To help get the sort of effortless power deemed appropriate for a Z, engineers gave this iteration of the VQ engine a relatively high displacement. Bore size for the Z, introduced as a 2002 model, was actually larger than 2002 Q45's 4.5-liter V-8, and nearly as big as the pistons in the 2002 Corvette's 5.7-liter V-8.

To further boost power, engineers worked to get more air in and out of the VQ engine. They redesigned the intake ports for better flow, increased valve lift and reduced exhaust-system back pressure. High-flow, a straight intake, and equal-length runners allowed free breathing.

A fairly high 10.3:1 compression ratio was chosen to enhance low-speed torque for good launch. By incorporating a knock sensor, the car ran acceptably on low-octane fuel, though optimum performance could only be obtained using premium-grade gas, which Nissan recommended.