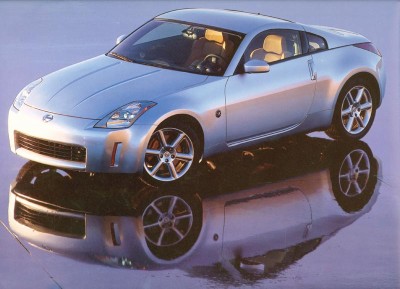 The 2003 Nissan 350Z was designed to be practical in terms of technology and price.
©2007 Publications International, Ltd.

The Z's role as symbolic flagship of Nissan is an important one, and the Nissan 350Z design reflected that role. The prior Z car, the 1990-1996 300ZX, was a technological showcase. It demonstrated that the corporation's engineering talent could build a car every bit the match of long-respected sports and GT cars, such as the Porsche 944 or the Corvette -- and then some.

But in so doing, the prior 300ZX lost the scent of the affordable-performance trail pioneered by the original Datsun 240Z.

In contrast, the 350Z's engineering was best described by the term "appropriate technology." There was no ultra-trick systems that might push its price too high. No Super HICAS 4-wheel steering, as on the 300ZX. No twin turbochargers. No active damping. No voice-recognition functions. No variable-induction manifold. And so on.

Although the new Z was right up to the minute in features and technology, there was nothing that was untrue to the original Z concept. After all, what good is it to build the best car in the world if only a few can afford to buy it?

To deliver everything customers expect of a high-quality, state-of-the-art sports car, a good foundation is crucial. Nissan called the unit-body structure of the 350Z a High Damping Body, in essence a dynamic spring with a stabilizing effect.

The body wasn't designed to achieve just high static-bending and torsional-rigidity numbers. The rigidity was designed as a dynamic system with the tires and suspension in place in order to improve driving stability and ride comfort. It resulted in a body with significantly higher torsional and bending stiffness than that of the previous 300ZX.

The unit body of the 350Z was designed to be rigid yet devoid of performance-robbing weight.
©2007 Publications International, Ltd.

But the body wasn't just stiff for stiffness' sake. It had been analyzed not only on computers but also through multiple trial-and-error procedures using actual prototypes. This resulted in the placing of extra beef where it needed to be for strength, and the removal of excess fat where a weight reduction would contribute to performance and efficiency.

Key structural elements of the car's design included a double-panel floor, a double front bulkhead and large-section door sills. The double-panel floor gave the necessary foundation for future bodystyle variations. Roof rails and side panels were laser welded for a strong, accurate fit. And a rear strut brace, bolted and welded in place, restored any rigidity lost by adopting a rear hatchback and foregoing the traditional steel rear bulkhead of a notchback coupe bodystyle.