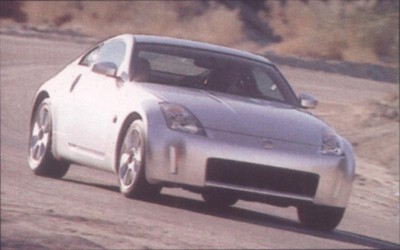 The underside of the car was designed to be perfectly flat and reduce lift.
©2007 Publications International, Ltd.

In developing the 350Z's body, engineers spent lots of time in Nissan Technical Center's wind tunnel testing the 350Z aerodynamics. But not for the reasons you might think.

This was a sports car, bulging with muscularity and character -- not some bar-of-soap science experiment. The bragging rights for the car with the world's lowest coefficient of drag would have to wait.

Instead, the aerodynamic work was directed primarily at attaining zero body lift. Increased stability would be the benefit, with lower wind noise a pleasant side effect. By managing the airflow under the car, the tendency of the body to lift during high-speed driving was eliminated and the car felt as if it was driving in a vacuum. The precise handling experienced at low speeds could also be enjoyed at high speeds.

The myriad changes that resulted from this research were subtle, but important. For starters, the 350Z's floor was designed to be as flat as possible, with few pieces protruding and creating drag. The exhaust system was routed to hug the underbody, with the crossflow muffler laid out flat.

The fuel tank was tucked up under the floor beneath the luggage area. The front bumper and engine undercover were shaped to help compress the air and increase its velocity -- thus decreasing the pressure and creating a vacuum under the car, sucking it to the ground.

At the rear of the engine, undercover airflow was dispersed to reduce lift. Air was guided and further hustled along through floor side farings and underfloor deflectors. In addition to a rear diffuser to reduce rear lift, the Track model featured a small chin spoiler behind the bumper and an equally minimal deck spoiler at the rearmost edge of the hatch door.

Considering the not-inconsiderable bulges over its wheelhousings, the base 350Z netted a respectable 0.30 coefficient of drag. For the Track model, the Cd dropped to a rather slippery 0.29.