350Z Rear Suspension and the VDC 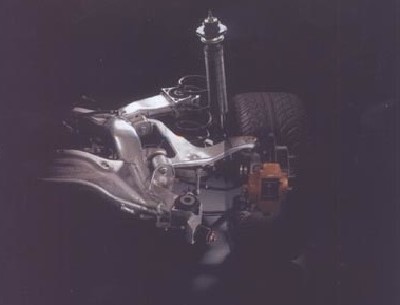 The rear suspension made generous use of aluminum, as does the front, to reduce weight.
©2007 Publications International, Ltd.

The 350Z rear suspension and the VDC complemented the front suspension in its pursuit of a well-rounded driving experience.

The new multi-link design in the rear suspension featured high camber stiffness thanks to the increased distance between the upper A-arms and lower control links. It gave high lateral stiffness and a great sense of stability, but it was also tuned for low stiffness in the longitudinal mode, which contributed to ride comfort. This was done by separating the lateral and longitudinal road loads with a radius rod.

The rear shock absorbers were now located inline with the wheel center.

Separation of the springs from the shock absorbers resulted in 60 percent less friction in the residual moment, which means the suspension could react faster to road inputs. And this configuration also provided for more luggage space because the wider shock-absorber span intruded less into the cargo area.

Along with handling prowess, the 350Z's sporting mission demanded exceptional stopping power. The base 350Z brakes were a power-assisted 4-wheel-disc arrangement with high friction-coefficient pads.

The goals of this system included smoothness, linear performance, and easy controllability. Engineers aimed for a firm pedal feel that wasn't high-effort. Even with the standard 4-wheel discs, the plan was for the 350Z to deliver shorter stopping distances than a BMW M Roadster, Honda S2000, Porsche Boxster S, or Chevrolet Corvette.

Even with standard brakes, the 350Z was designed to deliver short, sure stops. The gold calipers shown reveal these as the available Brembo-brand brakes.
©2007 Publications International, Ltd.

For those who needed even more powerful brakes, an optional Brembo system was offered. It featured the same large 27-millimeter front caliper pistons and 13-millimeter rears, as well as the 324-millimeter front and 322-millimeter rear rotors as those on the high-performance Nissan Skyline R34 GT-R. It was available only on the Track model, which also included 18-inch forged-aluminum-alloy wheels and front and rear spoilers.

VDC enhanced vehicle stability and improved performance in emergency avoidance maneuvers regardless of the road surface or weather conditions. Working with the antilock and traction-control systems, VDC could reduce engine torque or apply individual brakes as necessary to stabilize the car under severe cornering situations.

For example, if the car were understeering in a turn, VDC could reduce throttle and apply the brake to an outside rear wheel to bring it back to the driver's intended path. Or if the car were oversteering, VDC could brake an inside front wheel to correct the potential fishtail and bring the car back into line.

This feature helped make the 350Z more of an all-occasion, all-weather car. With such a technological backstop, the driver could relax and enjoy the performance of the car a bit more.

Nissan engineers tuned the VDC system to provide necessary intervention, as when a tired or stressed driver finds himself on an icy road, but not to interfere with sports-driving fun on a dry road.

Another safety enhancement was the tire-pressure warning system. A pressure sensor within each wheel in the center of the rim halves could send a radio signal. An antenna in the 350Z's front roof pillar would relay this signal to a receiver in the dashboard.

That information would appear as a digital readout on the drive computer display in the group of secondary gauges on the center stack. The driver would be warned by both a lamp and a buzzer when low tire pressure was detected.