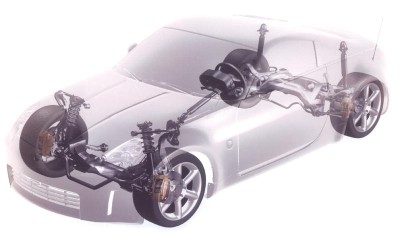 Despite sharing its platform, the 350Z had unique engineering in the front suspension system.
©2007 Publications International, Ltd.

Building on a sound aerodynamic platform, Nissan engineers added a design for the 350Z front suspension and steering that would enhance the driving experience.

Overall, they kept two main goals in sight. First, the driver should experience a "flat ride," a stable platform for the enjoyment of driving, And secondly, the car must deliver a natural and nimble response. As a practical matter, the new suspension had to be compact to package within the requirements of the new front mid-ship platform.

Both the front and rear suspension utilized a large number of lightweight, aluminum-alloy components to reduce unsprung weight so the tire and wheel had less inertia to overcome to follow the undulations of the road. In the front suspension, these included the aluminum axle housing (upright), upper link and lower links (consisting of the transverse link and compression rod). Compared with the previous 300ZX, the total weight reduction of the 350Z's front suspension was 25 percent.

A strut front suspension would have met the cost and packaging requirements of a high-volume front mid-ship design, but Nissan product planners wanted a better-handling setup. The answer was a multi-link arrangement with upper and lower wishbones or links, but one with an interesting twist.

Nissan engineers split the lower link in two, creating two links, each with its own lower ball joint. This effectively gave the front suspension of the 350Z two separate lower pivot points, one on the outboard edge of the transverse link and the other on the end of the compression rod.

In plain English, this endowed the Z front suspension with a dual personality, one that could optimize wheel alignment depending on whether the car was turning or going straight. Designed with untold hours of computer modeling, Nissan received 14 patents for this new suspension design.

Combined with a long upper link, the double-pivot arrangement provided for a more-optimum wheel center location. The kingpin axis, an imaginary line drawn through the upper ball joints and the intersection of the axis for the two lower links, had a reduced offset providing for excellent straight-ahead stability, even on rough roads, and helped give a smooth, shimmy-free steering feel.

Additionally, the double-pivot and long upper-link setup helped keep the front wheels more perpendicular to the road as they travel up and down with the road surface, effecting superb turn-in response.

The liberal use of aluminum suspension components helped reduce weight in the 350Z.
©2007 Publications International, Ltd.

Also, unnecessary body movement from small scuff changes in the road was reduced with the new setup. The result was the driver could settle in more and enjoy the drive.

Finally, the double-pivot front suspension contributed to driving enjoyment through a caster-trail change. When the wheels were pointed straight ahead, such as when cruising down the highway, the dual ball joints allowed more caster trail for straight-line stability. But when the wheels were turned as during cornering, less caster contributed to finer steering precision and better feel.

There was just one level of suspension tuning for the 350Z, although both 17-inch and 18-inch wheel/tire packages were offered. The front suspension was carried in a subframe mounted directly to the body structure.

In keeping with the 350Z's intended handling personality, its steering was designed to be straightforward and communicative. This rack-and pinion-system's quick 15.9:1 ratio meant less hand shuffling in the twisty bits, and its 2.6 turns lock-to-lock helped make parking easier.

In the interest of maintaining affordability, the complex variable-orifice, variable-boost system of the previous 300ZX was not used. Instead, a very responsive, linear, and predictable system with engine-speed-sensitive boost provided the kind of handling that allowed drivers to easily trace the line they picked.

At low engine speed, such as when parking or maneuvering in city traffic, generous boost was provided to reduce the effort needed to turn the steering wheel. But at higher engine speeds, as when the Z was cruising down the interstate, boost was reduced.