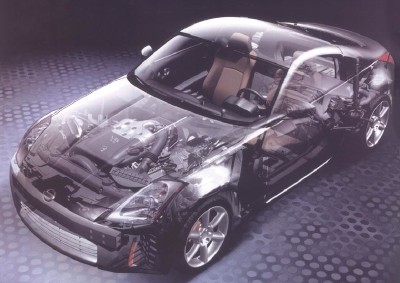 Along with efforts to make the VQ V-6 suitably powerful, considerable attention was given to transferring its output through the 350Z transmission and drivetrain in a manner that enhanced the driving experience.

For this, a new, lightweight 6-speed manual transmission was developed. This high-torque unit featured close-ratio gearing from 1st to 5th speed ranges for high-performance driving and a tall, overdrive 6th speed for long-legged highway fuel economy, and reduced engine noise.

Using structural analysis, all parts were reduced in size and weight where possible. The end result was a 6-speed unit that weighed and occupied as much space as the 5-speed manual in the previous 300ZX.

The 1st- and 2nd-gear synchronizers were a durable, double-cone design that used copper-alloy double baulk rings to allow the gears to mesh more smoothly during shifting. New sintered-iron material was used on the single-cone synchronizers for the other gears.

Even reverse gear was now synchronized to help prevent gear clash if reverse were selected while the car was rolling forward. A double-mass flywheel helped eliminate gear rattle noise.

Shift feel was designed to have short strokes between very well-defined gates. Nissan engineers benchmarked the shifter in the BMW M Coupe with the aim of making the Z's stir-stick better still. The shifter stroke of the 350Z was significantly shorter than on the previous Z.

For those who prefer a somewhat less-involved driving experience, automatic transmission was available. The 350Z's all-new 5M-ATX 5-speed allowed full manual control, and was one of the industry's lightest, smallest, most-advanced full-range autoboxes. Compared with the previous-generation Z's 4-speed automatic, the new transmission was 48.5 pounds lighter, yet offered 52 pound-feet higher torque capacity.

Its low-inertia gear train consisted of three planetary gearsets, six clutches, one band, and a single one-way roller clutch with many of the pieces made from die-cast aluminum. The transmission's direct-control system used individual actuators to regulate the pressure of each clutch and band and offered synchronized, torque-managed shifts from 1st to 4th gears.

A real-time learning algorithm helped the transmission continuously tailor shifting performance to the driver's habits and patterns. A new compact E-Flow torque converter locked up in both 4th and 5th gears as part of a strategy to improve fuel economy. It also featured a multi-disc clutch for smoother engagement.

New "fill-for-life" ATF meant the transmission fluid never had to be changed under normal driving conditions. Nissan was justifiably proud of the work it did on the Z's automatic transmission and applied for approximately 100 patents on this gearbox in Japan.

Where a two-piece steel driveshaft with a center support bearing and center U-joint once resided, the 350Z featured a one-piece carbon-fiber reinforced-plastic unit. This was a first for Nissan.

Aside from reduced parts complexity, the new driveshaft afforded the benefit of a 40 percent weight reduction. The carbon-fiber material improved noise, vibration and harshness control because it was less of a natural noise conduit than steel.

Also, without the complication of the center bearing on the steel driveshaft, the carbon-fiber unit could be designed to break away on severe frontal impacts, allowing the engine, transmission, and driveline to tilt down and under the floor instead of intruding into the cabin during a collision.

A viscous limited-slip differential was standard on all Zs except the base model. The fluid in the viscous coupling automatically could sense increased demand on either rear wheel and become thicker, taking up the clearance between clutch plates in the differential and evenly distributing the available drive torque to both rear wheels. It could improve traction on slippery road surfaces and enhance directional stability under hard cornering.

And so, with the 350Z's mechanical components squarely aimed at a well-rounded, highly entertaining sports-driving experience, all that remained to complete the picture was a suitable cabin environment.