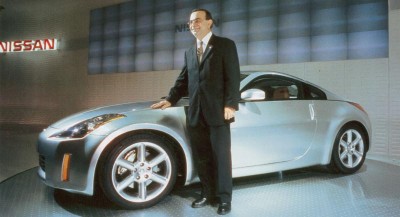 Every journey has a beginning and an end. But, in the case of the 350Z mission, that end isn't clearly defined.

True, its design was finished, the myriad engineering details were attended to, and the production line had been rolling for years. But the 350Z story was never been entirely about just this one car. It was about reinvention, rediscovery, reprioritizing.

Nissan's product line between the previous-generation Z car and the current one focused mainly on the practical, the rational, the conservative. The creation of the Z was about proving that, in certain situations, the emotional side is the practical side.

A voyage such as this doesn't move in point-A-to-point-B fashion. It is a continual process. The 350Z was a first step.

Nissan President Carlos Ghosn was among the first to see the need for this rediscovery process, and it was clear he had an intuitive feel for how the 350Z would fit into Nissan's brand presence.

For Nissan, the Z was as much of a statement about the company's philosophy as it was a car.
©2007 Publications International, Ltd.

"The Z is a very strong example about what I call a complete car," Ghosn said. "It's a car that appeals both on the rational part and on the emotional part because it has the design, style, image and performance that makes it a very strong and effective offering.

At the same time, it's a car that is unique in its category, not only by its performance, but by its affordability. So, coming with a new 350Z is for us a sign and a decision made by the company to tell to the public we want to be at the avant-garde of competition. Not only on the rational base, but even on an emotional base.

"In the past, the Z was able to fulfill its mission for Nissan," he continued. "And a lot of people are familiar with Nissan through the Z, especially in the U.S. I was one of them, having once owned a 300ZX when I worked for Michelin in the early 1990s.

"Yesterday, I saw a Fairlady Z driving in Tokyo and I was amazed that the car, which was first a concept some 14 or 15 years ago, still didn't have any wrinkles. It's still modern. It's a car that you might still buy today, without thinking that you are driving a car that is obsolete. It's remarkable that this concept is still up-to-date. And we hope the new Z will continue this reputation of a product that doesn't age, one that's authentic and powerful.

"So putting this Z on the market really is a strong sign that Nissan is back with determination. The Z is a statement to the dealer, to our customers in the U.S., particularly, but even worldwide because this car will be sold in many markets, that Nissan is determined to offer the best for its customers and its potential customers.

"So, it's a very important decision. A decision which was backed by a lot of support not only by the North American team, but a lot of people here in Tokyo who are very supportive of bringing a new Z to the market."