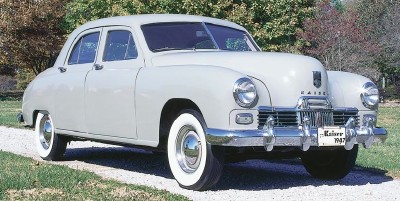 The initial price for the 1947 Kaiser Special was $1868. Postwar inflation quickly boosted it above two grand. See more pictures of Kaiser cars.

Henry J. Kaiser and Joseph W. Frazer literally parted company in 1949, but they'd been at loggerheads once before. In 1942, Kaiser was experimenting with plastic-bodied cars, hinting that he just might sell them for $400-$600 once World War II was over. He also suggested that auto companies announce their postwar plans immediately.

Industry-veteran Frazer was incensed: “I resent a West Coast shipbuilder asking us if we have the courage to plan postwar automobiles when the President has asked us to forego all work which would take away from the war effort.

Kaiser has done a great job as a shipbuilder … but I think his challenge to automobile men is as half-baked as some of his other statements … I think the public is being misled by all these pictures of plastic models with glass tops, done by artists who probably wouldn't want to sit under those tops in the summer and sweat."

This public brouhaha was long forgotten by July 1945, when Henry and Joe joined forces to form Kaiser-Frazer. Both men compromised, and their relationship was amicable, at least for a time. Though Henry discovered that his plastic car for the common man was just wishful thinking, he had high hopes for a more-radical Kaiser than what ultimately emerged.

It would have stemmed from the 1946 K-85 prototype, which looked like the conventional Frazer then already locked up, but employed unit construction on a shorter 117-inch wheelbase. Suspension and the "Packaged Power" drive­train, worked out by engineer Henry C. McCaslin, were very different.

For one thing, an 85-horsepower Continental six drove the front wheels, not the rears. A conventional three-speed transmission sent power via a helical-gear transfer case to a front differential, then to the wheels by U-jointed halfshafts. Equally novel was four-wheel independent "Torsionetic" suspension: a pair of longitudinal torsion bars, each 1.3 inches thick by 44.5 inches long. The steel bars twisted to provide spring action like conventional coils or semi-elliptics.

McCaslin wanted unit construction because "we needed to use more of the operation in the plant. We had the welding equipment but lacked large dies and cranes. It was a compromise to get the car into production."

But the front-drive K-85 didn't have a chance. Aside from exorbitant tooling expense, technical problems such as heavy steering, gear whine, and wheel shimmy proved insurmountable. With so much weight over the front wheels, the K-85 would have needed power steering and that would have added $900 to the retail price.

So in May 1946, K-F decided to abandon this idea for a conventional rear-drive Kaiser priced below the Frazer.

Production for both new makes began that June at Ford's huge wartime bomber plant in Willow Run, Michigan, near Detroit, that K-F had leased from the federal government's Reconstruction Finance Corporation. Like the Frazer, the new Kaiser Special was a 1947 model. Initial price was $1868, though postwar inflation quickly boosted it above $2000.

It was very much like the Frazer, of course: a roomy flush-fender four-door sedan with 123.5-inch wheelbase, styling by the eminent Howard A. "Dutch" Darrin, and a "stroker" six making 100 bhp from 226 cubic inches. The Kaiser wore a multipiece grille that was cheaper to make than the Frazer's because the pieces were smaller. Furnishings were naturally more-basic, in line with the lower price.

Perhaps inevitably, a fancier Kaiser Custom was added late in the model year at about $350 above the Special and $150 more than the standard Frazer, but some $250 less than the top-line Frazer Manhattan.

A bit later, Customs were offered with optional dual intake and exhaust manifolds that boosted bhp to 112. But Kaiser would have no automatic transmission through 1950 (after which proprietary GM Hydra-Matic was offered); only a standard three-speed manual available with overdrive as an $80 option.

Though plans called for building two Kaisers to every Frazer, the 1947 ratio was 1:1 so as to fill initial orders. Both lines were basically unchanged for 1948, when very few Customs were built, though Kaiser volume far outpaced Frazer's. These were outstanding years for what came to called the "postwar wonder company."