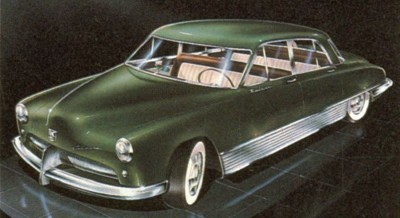 The 1940s and 1950s Kaiser-Frazer concept cars may have given a false sense of hope about the future for a company that didn't have much of a future.

Kaiser-Frazer Corporation lost about $100 each on some 1 million cars built over 10 years. That may sound like General Motors in the 1990s, but Kaiser-Frazer lived in the boom economy of the late 1940s and early 1950s, when poor judgment was about the only obstacle to automotive success.

And poor judgment was precisely what forced Kaiser-Frazer to abandon the U.S. market after attempting just three basic car designs. (Kaiser-Frazer also oversaw the final cars of Willys, which it acquired in 1953.)

Both wanted to build new postwar cars. Frazer lacked the money but had ample experience; Kaiser had tons of money but no know-how. After discusssions, Joe Frazer signed on as Kaiser-Frazer president, with Henry K. as chairman.

After raising $12 million (total initial capitalization was $52 million), they purchased Ford's 2.7-million-square-foot wartime bomber plant at Willow Run, Michigan -- the world's largest factory under one roof -- and hired design and engineering talent by the boatload. As production got going in June 1946, Kaiser-Frazer people felt, as one official later recalled, "as if there wasn't anything we couldn't do."

And indeed, Kaiser-Frazer could do no wrong -- for a while. Though conventionally engineered, the debut 1947-48 Kaisers and Frazers were fresh and appealing against most rivals' warmed-over prewar cars. Prices were stiff, yet Kaiser-Frazer vaulted to eighth in industry sales within a year, prompting some to call it the "postwar wonder company."

Yet though all seemed amicable between Joe and Henry, Kaiser soon started replacing Frazer's people with his own. By 1949 he controlled everything from the boardroom to the factory floor.

Which is how Henry was able to mandate 200,000 cars for 1949 over Joe's vehement objection. Knowing that Kaiser-Frazer could offer only facelifts against mostly all-new Big Three designs, Frazer wanted to build fewer 1949s, then come back strong with stunning all-new models then being planned for 1950.

But at one memorable board meeting, Henry declared, "The Kaisers never retrench!" With that, Frazer resigned and Henry appointed his own son Edgar as president. Henry got his 200,000 cars, but sold only 60,000 and lost $30.3 million, then close to a U.S. record for a company of that size.

This miscalculation had two ultimate results: the end of the Frazer nameplate and a six-month delay in launching the new second-generation Kaiser, which bowed in spring 1950 for model-year 1951. Until then, Kaiser-Frazer pushed out 1949 leftovers very slowly despite big discounts. Some were reserialed as "1950" models; about 10,000 others were transformed into 1951 Frazers via new front and rear sheetmetal.

Find out how this affected the 1951 model line by continuing to the next page.