by the Editors of Publications International, Ltd.
NEXT PAGE 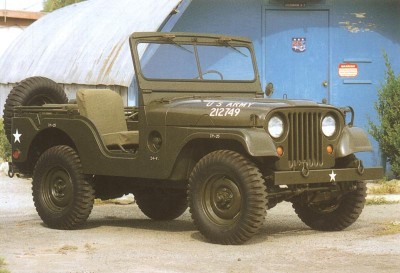 The early 1950s were strange times in the U.S. automobile industry. But at the same time Willys produced over 50,000 Mcs and MDs a year for the military. See more Jeep pictures.
©2007 Publications International, Ltd.

In 1952 Willys-Overland re-entered the passenger car market with its innovative Aero-Willys. The car was a lightweight, unibody compact weighing just 2600 pounds and riding a 108-inch wheelbase. It was well engineered and drew rave reviews. However, the Aero-Willys sold for $150 more than a Chevrolet Bel Air hardtop. Dealers were hard pressed to sell the 31,000 they managed to move that first year.

At the same time the auto industry as a whole had hit a sales slump, and the Korean War was forcing new rationing policies for steel and rubber. Despite all of this, Willys managed to increase sales to 42,000 units for 1953.

Yet, it was too little too late. The combined effects of costly new tooling for the new model and the recession had put Willys in deep financial trouble again. There was no miracle salesman like John North Willys around this time, and the company was put on the block.

In April of 1953, the Kaiser-Frazer Corporation purchased Willys-Overland for approximately $60 million. Ward Canaday had turned the reigns over to Henry J. Kaiser and his son, Edgar.

Though the prospect of new ownership brought hope, there were two major problems with the Kaiser buyout. First, Kaiser was in no position to spend any money. The company had lost almost $10 million the year before and over $34 million in its five-year history. Also, the Aero-Willys wasn't much larger than the Henry J, the low-price leader at Kaiser-Frazer. Despite this, Kaiser knew that the Jeep was where the fortune would be made.

If there had been one persistent complaint about the CJ-2A and CJ-3A Jeeps -- as well as the military MCs -- it had to do with their perceived lack of power. The same shortcoming had been true of other Willys models, including the Jeepster and the Station Wagon.

Barney Roos and his engineering staff had undertaken to increase the horsepower of the little four-banger by converting it to the F-head configuration. (For those readers who may be unfamiliar with this type of layout, the F-head engine's intake valves are in the head, while the exhaust ports remain in the block. Larger valves can thus be used, and greater power results from the improved breathing.) Keep reading to find out about the Jeep CJ-3B.