The 1951-1953 Kaiser Traveler, first seen in 1949, could be thought of as the granddaddy of the modern hatchback. See more classic car pictures.
©2007 Publications International, Ltd.

The 1951-1953 Kaiser Traveler was the brainchild of entrepreneur Henry J. Kaiser -- who, it was said, averaged about 100 ideas an hour and about one of them was good. The good ones, however, were worth pausing over. During World War II, one of these was Kaiser's "cookie cutter" production line of Liberty and Victory ships, which broke the U-boat threat by sheer numbers; after the war, another idea emerged as the Kaiser Traveler: the first hatchback.

Improbable as it seems, the story really is true. Henry Kaiser conceived the 1951-1953 Kaiser Traveler by tracing the outlines of its double-opening hatches with his finger in the dust on a sedan in the Kaiser garage in Oakland. At that point, the idea was simplistic: cut out the entire deck and rear window area, hinge half of it to lift up and half to flop down, let them meet about halfway on the deck, and presto: a new kind of utility car.

It wasn't quite so easy; 200 changes had to be made to the basic sedan before the Kaiser Traveler could be built. It required stronger springs and shocks to handle the increased payload, new floor pan wiring, a method to display the license plate, and reinforcement "all over hell" (according to engineer Ralph Isbrandt) to replace lost stiffness.

The detail execution on the Kaiser Traveler was clever. Harvey Anscheutz, Kaiser-Frazer's head of body development, spent three weeks with the laws of 48 states on his desk, devising a lighted license plate holder that would flop down when the deck was lowered without violating any position or visibility laws.

A big, T-shaped handle was devised to ease the operation of the hatches on the Kaiser Traveler, and a strong piano hinge strengthened the lower hatch. When open, this member was suspended by strong chains, bagged in vinyl to prevent rattles. Anscheutz also created a folding rear seat by tilting the cushion forward against the front seats and lowering the backrest to extend the cargo platform to its seven-foot length. The seat folding method is still used in wagons today.

Some aspects were makeshift, however: on the 1949-1950 models, which lacked a sub-floor spare tire compartment, the left rear doors were welded shut and the spare bolted to the inside panel. (To confuse matters they dummied up a non-operable outside door handle, which must have frustrated many a passenger.) But this problem was handily cured on the handsomely restyled 1951 Kaiser Travelers.

To see how Kaiser further updated its models on the 1951-1953 Kaiser Traveler, keep reading.

The 1951 Kaiser Traveler received the same handsome all-new styling as the rest of the Kaiser-Frazer line.
©2007 Publications International, Ltd.

The 1951, 1952, 1953 Kaiser Traveler was offered in both the Special and Deluxe series for 1951, with two and four doors. Sales of two-door versions were minimal, and after a handful of ex-1951s were reserialed and sold off as 1952 "Virginian Travelers," Kaiser built only four-door models.

These four-door Kaiser Travelers continued through 1953, almost all in the lower-end series; more luxuriously trimmed 1952-1953 "Manhattan Travelers" were ostensibly offered, and at least one example has been found. Though the pre-1951 models had sold in good numbers, these later Travelers did not appeal, possibly because the new body restricted their capacity -- only a few thousand were sold between 1951 and 1953.

Compared to the workaday station wagon, which still tended to be a boxy, truck-like vehicle made largely of wood in the late 1940s, the Kaiser Traveler was a revelation -- and probably did more to popularize the civilized, all-steel wagon than most people realize.

General Motors and Ford bought Kaiser Travelers and tore them apart, to see if their obvious advantages were compromised by any structural shortcuts. "They were pretty good," one GM engineer said. Much later, of course, the Traveler idea would lead to the modern hatchback, though not in quite the same way.

One big problem that Kaiser-Frazer never licked was the seals insulating the hatches from the rest of the body -- and from each other. Seal and rubber technology was not nearly so advanced then as now, and Kaiser Traveler hatches leaked incessantly.

Another, minor contribution of the Traveler was its vinyl upholstery, pleated and embossed on the 1951-1953 Kaiser Traveler Deluxe models and the 1953 Manhattan. Working with the L.E. Carpenter Company of New Jersey, K-F interior designer Carleton Spencer developed the unique, heavy-duty upholstery, created by low-pressure refrigerated embossing.

The smooth vinyl of the 1951-1953 Kaiser Traveler was heated and fed into a machine with refrigerated plates in the die design. The die then "kissed" the vinyl and immediately caused the design to set through heat transfer. The stuff was called "Dragon" and "Dinosaur" vinyl, Spencer said, "so no one would mistake it for real alligator or real lizard."

Keep reading to see the specifications of the 1951-1953 Kaiser Traveler. 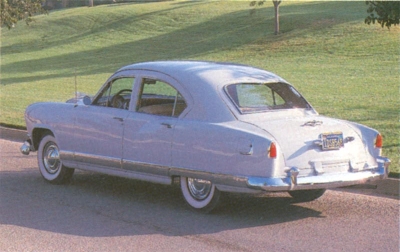 Scholars argue that the 1951-1953 Kaiser Traveler was a major force in the popularization of the all-steel station wagon of the 1950s and 1960s.
©2007 Publications International, Ltd.