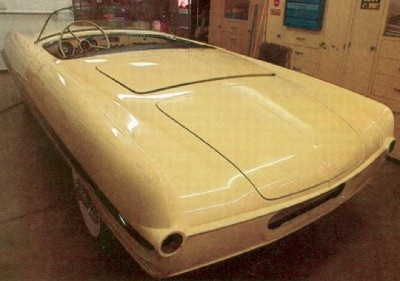 Among American car designers, the name Virgil Exner remains prominent nearly two decades since his death in 1973. More than most stylists, probably more than any of his contemporaries, Exner produced show cars bearing his personal stamp. Between 1951 and 1962, when he left the company, he successfully spun-off their ideas on numerous production models. It is generally conceded that by 1957 -- largely with design ideas evolved from his earlier show cars -- Exner's blend of extroverted innovation and classic-era hallmarks had the legs of everybody else in the industry, including Harley Earl's vaunted General Motors.

Ex's formula was simple: conventional passenger car chassis, occasionally shortened but otherwise mostly stock, combined with svelte bodies and interiors handcrafted by Ghia coachworks in Torino, Italy, for a fraction of what they would have cost to build in Detroit.

Asked about his show cars by writer Michael Lamm in the early Seventies, Exner explained: "There was really only a single purpose in all of them, and that was to let the public know that Chrysler was thinking ahead as far as styling was concerned." But in contrast to the contemporary specials from General Motors, for example, Exner's cars were always built with production requirements in mind. "As a result," Exner continued, "they had to be compromised to a certain degree from what you normally would do with a strict 'dream car.' But two or three of them came very close to being built."

In my own conversations with Exner, he was almost wistful about this last point; he really did want Chrysler to build a sporting rival to the Corvette and Thunderbird. On at least three occasions he created show cars which could easily have been translated into production automobiles. One of these was his 1953-1954 series of Dodge Firearrows.

The Firearrows followed a logical progression from dream car to producible vehicle. The first one-which we ought only to count as one-half-was a "buck" on a Dodge chassis. It didn't run and was really only one step up from a full-size clay model. Establishing a proportion Exner strove for, this 1953 Firearrow I was more than twice as wide as its body height at the cowl. "The body itself is flat and broad with only a slight crown, or slope, in its top and side surfaces," said a contemporary description. "Stylists have a word for this . . . they call it 'tautness': the metal between any two points seems stretched to fill the space smoothly, with no wasted contour, rather than appearing full-blown or overly curvaceous." It was the diametric opposite of typical mid-Fifties design.

For more information on the 1953-1954 Firearrow, continue on to the next page. 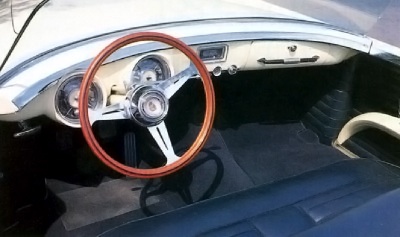 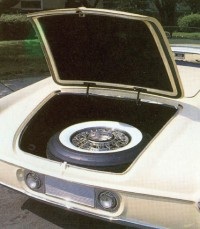 The rearmost locker for the spare tire, the other for luggage.
©2007 Publications International, Ltd.

Joe Bortz is now a familiar name among car collectors, a man who has earned their admiration for his single-minded dedication to finding, rescuing, restoring, and displaying show cars from the heroic age of styling, the Forties through the early Sixties. "I could name every car on the road by the time I was five," Joe remembers. "By age 12 I was answering for sale ads in the Chicago Tribune, calling sellers just to talk about their cars and telling them I was 17." My love has always been for the visual -- I don't know anything about cams or crankshafts, and racing bores me."

But Joe's first collector car was a 1920 Chevy two-door landau coupe, so how did he get from there to the finest collection of postwar dream cars in the country? "I went from Chevys to Classics, like the Cadillac V-8, Cord 812 Sportsman, and '31 Duesenberg Rollston Victoria. Around 1971, I began to get interested in special-interest cars of the Fifties and Sixties. It was before their time. People would say, 'I can see why you'd want one of those things -- but six?' Of course, nobody says that anymore."

When Joe found Pontiac's 1960 X-400 show car, he suddenly realized that it was possible for one-offs to survive -- "until then, like everyone else, I just assumed they were all cut up or junked." So he went hunting in a serious way.

Today the Bortz Auto Collection under Joe's son Marc owns two dozen one-offs representing the Big Three and several independents. Joe, who serves as curator, is writing a book on American designers, in between showing his wonderful collection.

"We have a rule," he continues. "Every car must be registered and driveable at a moment's notice at least 300 miles. This is a big responsibility for Marc, because although we have a self-imposed limit of 50 cars, that's a lot to worry about and something is always needing a fix." Joe likes to show dream cars in groups of three to six, which he believes lends necessary visual impact. From August 12 to mid-September 1991, however, the Auburn-Cord-Duesenberg Museum in Auburn, Indiana, showed a dozen Bortz dream cars, the Firearrow II among them.

The dash of the Dodge Firearrow.
©2007 Publications International, Ltd.

"Chrysler's attitude toward one-offs was different from GM's or Ford's," Joe says. "They tended to store or destroy their cars, but Chrysler, being harder up, often sold them. This helped pay the overhead, but to avoid heavy import duties after all that expensive Italian bodywork, they often sold a car out of the continental United States, to places like South America, Europe, or the Middle East."

For more information on the Firearrow II, continue on to the next page. 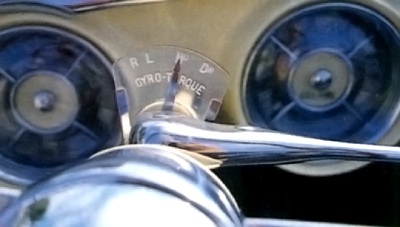