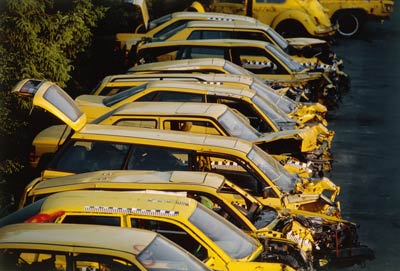 These cars have been put to the collision test at an automobile safety research facility in Wolfsburg, Germany. Notice how the crumple zones appear to have absorbed most of the impact.
Peter Ginter/Getty Images

Whenever a car is involved in a crash, intense kinetic forces are at work. A given amount of force is present during any crash. The actual numbers vary based on the speed and mass of the car and the speed and mass of whatever it hits. Physicists measure this force as acceleration -- even when moving from a high speed to a lower speed, any change in speed over time is scientifically referred to as acceleration. To avoid confusion, we will refer to crash acceleration as deceleration.

Crumple zones accomplish two safety goals. They reduce the initial force of the crash, and they redistribute the force before it reaches the vehicle's occupants.

The best way to reduce the initial force in a crash with a given amount of mass and speed is to slow down the deceleration. You've seen this effect for yourself if you've had to slam on your brakes for any reason. The forces you experience in an emergency stop are much greater than when you gradually slow down for a stoplight. In a collision, slowing down the deceleration by even a few tenths of a second can create a drastic reduction in the force involved. Force is a simple equation:

Crumple zones accomplish this by creating a buffer zone around the perimeter of the car. Certain parts of a car are inherently rigid and resistant to deforming, such as the passenger compartment and the engine. If those rigid parts hit something, they will decelerate very quickly, resulting in a lot of force. Surrounding those parts with crumple zones allows the less rigid materials to take the initial impact. The car begins decelerating as soon as the crumple zone starts crumpling, extending the deceleration over a few extra tenths of a second.

Crumple zones also help redistribute the force of impact. All of the force has to go somewhere -- the goal is to send it away from the occupants. Think of the force involved in a crash as a force budget. Everything that happens to the car during an impact and every person inside of the car at the time of the impact spends some of the force. If the car hits a non-stationary object, like a parked car, then some force is transferred to that object. If the car hits something with a glancing blow and spins or rolls, much of the force is spent on the spinning and rolling. If parts of the car fly off, even more force is spent. Most importantly, damage to the car itself spends force. Bending parts of the frame, smashing body panels, shattering glass -- all of these actions require energy. Think of how much force is needed to bend the steel frame of a car. That amount of force is spent on bending the frame, so it is never transmitted to the occupants.

Crumple zones are based on that concept. Parts of the car are built with special structures inside them that are designed to be damaged, crumpled, crushed and broken. We'll explain the structures themselves shortly, but the fundamental idea is that it takes force to damage them. Crumple zones spend as much force as possible so that other parts of the car as well as the occupants don't suffer the effects.

So why not make the entire car one giant crumple zone? And if you need space for a crumple zone to absorb impact, how do you build a compact car with crumple zones? We'll explain in the next section.

The Inventor of the Crumple Zone

Béla Barényi was an engineer and inventor who spent most of his career working for Daimler-Benz. His name appears on more than 2,500 patents. One of those patents, issued in 1952, explains how a car could be designed with areas at the front and rear built to deform and absorb kinetic energy in an impact. He put the concept to use in 1959 on the Mercedes-Benz W111 Fintail, the first car to use crumple zones [source: German Patent and Trade Mark Office].