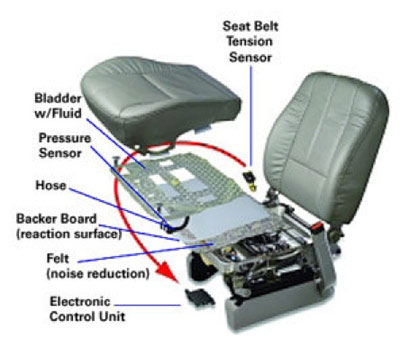 When airbags became required equipment on all U.S. automobiles in the 1990s, they represented a big leap ahead for vehicle safety. Prior to that, drivers and passengers had little more than their safety belts to restrain and protect them in the event of a collision. Today, airbags have reduced driver fatalities by 29 percent and passenger fatalities by 32 percent -- and are the reason more than 27,000 people have survived car crashes [source: Insurance Institute for Highway Safety].

While airbags save lives, they aren't perfect. The National Highway Traffic Safety Administration says nearly 300 people have died as result of airbag impacts since 1990. The majority of those were in cars equipped with early, overly sensitive airbag systems, and most of the deaths were children and infants.

For children and people of small stature, the impact of an airbag inflating at more than 200 mph can cause permanent or deadly head and spinal injuries. This is the reason that drivers are told to put smaller passengers in the back seat. It's a law in some states. But what if you are carrying several passengers in the backseat and have to put a child up front? What if you drive a two-seater car?

For that reason, car companies are now required to equip certain vehicles with Occupant Classification Systems (OCS) -- a system of sensors that detect who's sitting in the passenger seat. OCS eliminates the need for an on/off switch for airbags in most cases because it uses sophisticated computer technology to identify whether an adult or a child is in the seat.

Before we take a look at Occupant Classification Systems, let's review how the airbag itself works. In the event of a crash, a sensor triggers a nylon bag inside the steering wheel, door or dashboard to instantly fill with compressed nitrogen gas. The goal of this is to cushion the occupant from a powerful impact.

In this article, we'll explore the development and use of Occupant Classification Systems, and look at why airbags are still no replacement for safety belts.