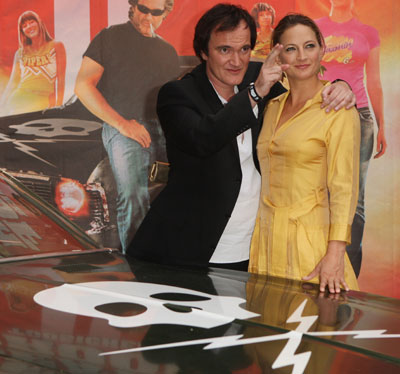 In the 2007 Quentin Tarantino movie "Death Proof," a maniacal driver named Stuntman Mike boasts that his 1970 Chevrolet Nova is exactly what the film's title suggests: It's death-proof. In the hands of a safety-conscious driver, this would be a good thing. But Stuntman Mike isn't all that concerned with safety -- not his passengers' or any hapless people who cross his path.

Mike has outfitted the driver's side of his car with a cage and five-point seat belt to ensure his own survival when he hits other cars at high speeds. This is a good precaution on Stuntman Mike's part because he enjoys doing just that -- with gory results.

While the movie is fictitious, it does raise the question: Could a car really be death-proof? Would it be like Stuntman Mike's Nova, reinforced with steel beams and shatter-proof glass? That likely wouldn't be the case. Instead, what's ahead in the future of car safety -- including what may eventually emerge as a death-proof car -- is more in line with technological ingenuity than old-fashioned brute strength.

The best way to survive a car accident is to avoid it. So auto engineers are hard at work coming up with cars that protect passengers not so much by reinforced steel cages (although most vehicles have those, too), but rather with technology that helps drivers avoid collisions altogether.

Stuntman Mike's Chevy Nova is pretty cool. But the death-proof cars of the future will probably look a lot more like high-end Volvos, BMWs and Lexuses than a classic Detroit muscle car. And Volvo may be up first. As a working member of the PReVENT safety research group, the car manufacturer has promised an injury-proof car by 2020 [source: Reuters]. Those who can afford the luxury cars will benefit first; it'll take some time for these cutting-edge safety features to make their way into economy cars.

Many of the features that will comprise accident prevention systems in the future already exist. The challenge will be tying these components together.

Why will these systems be able to handle accidents better than a car's driver? Find out on the next page. 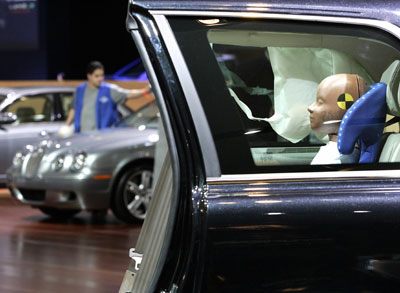 A crash test dummy in the back seat of a Volvo at the 2006 New York Auto Show. Volvo is working on an injury-proof car, due out in 2020.
Timothy A. Clary/AFP/Getty Images

When humans are scared, our bodies freeze in the face of danger. This holds especially true when it comes to auto collisions. Research shows that the average driver takes about 1.1 seconds to react to an accident before braking [source: Fambro, et al]. This may not sound like much time, but considering that a reduction of 10 mph before a crash could cut the rate of death in highway accidents by 50 percent, that one second can be significant [source: Reuters]. What's more, in half of all rear-end collisions, the brakes are never even applied by the oncoming driver [source: Volvo].

Auto safety engineers are working under the premise that if cars are making calculated decisions about an impending collision, accident rates will go down. By taking humans' emotional reactions (or lack thereof) out of the equation, engineers may be closing in on a death-proof car.

Of course, the term "death-proof" may not be entirely accurate. Even the best systems fail. But engineers at the PReVENT project are researching how to build the most death-proof car possible. They're reimagining some safety features available in today's digital cars. Instead of using these systems to provide drivers with information to avoid a crash, the goal is getting the systems to think for the driver.

One existing safety feature is the precollision prevention system. It uses lasers, infrared sensors and cameras to detect obstacles ahead in the road. A warning light and an alarm alert drivers to the impending danger. The car then prepares for the accident by tightening seatbelts, engaging airbags and increasing brake pressure (and in some cases, applying the brakes on its own). Another system in place is blind spot detection. These keep an eye on other cars the driver can't see, letting him or her know other cars are there.

These features signal to a driver that a potential problem is near. PReVENT is working on using these features to actually take over when that problem goes from a potential threat to a real danger. The group is engineering intelligent car systems that analyze the impending situation from all angles -- literally. So while the driver's frozen in terror, the car's navigating out of an accident.

PReVENT's vision of a safer car is one that uses information from satellite navigational maps to detect hairy road conditions -- like hairpin curves. The system will monitor blind spots for the presence of other cars, pedestrians and obstacles, tracking the speed and direction of each. With all of this information, the car's onboard computer will calculate the best course of action to take, whether it's applying the brakes, swerving or both [source: ICT Results]. In the future, car navigation algorithms may make risk assessments -- like determining that running over a squirrel to the left is preferable to hitting a woman pushing a stroller to the right.

While there may never be a truly death-proof car, an automobile that aims to protect against injury is quite plausible. More people are injured in car wrecks than are killed; auto fatalities reach about 1.2 million globally each year, while there are about 50 million injuries around the world [source: Reuters]. If the technology being developed by PReVENT is refined and widely introduced, both of those statistics may dramatically decrease in the near future.

Why Syncing Stop Lights May Not Solve Traffic Woes
Is all-wheel drive always safer in the snow?
What happens if your used car is recalled?