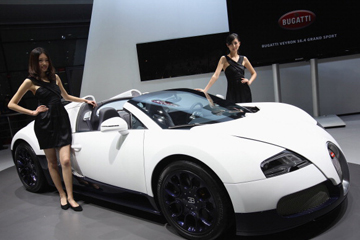 What's the fastest you've ever gone in a car? 90? 130? 150? More than likely, you've never come even remotely close to the incredible speeds the Veyron is capable of. After all, you don't really need to, even if you are super late for a meeting.

Those kinds of top speeds are out of the reach of nearly all cars on the road anyway, thanks to a device called a speed limiter, which also sometimes called a "governor." Like many functions on modern, fuel-injected cars, speed limiters operate through electronic sensors and the engine computer.

Here's how it works: A series of sensors detect how fast you're going, then communicate that information to the engine's computer, which manages nearly all the engine's functions. Once you reach a pre-determined top speed, the computer steps in and restricts the flow of air and fuel to the engine and even the sparks that cause combustion. Either way, you'll be unable to exceed the top speed as determined by the car's manufacturer [source: K-Speed].

So what vehicles have speed limiters? In many countries, they're required on mopeds and some commercial vehicles. In the U.S., the National Highway Traffic Safety Administration began looking at mandatory speed limiters on heavy-duty trucks in 2011. As for passenger cars, every vehicle is different. Economy cars tend to be limited to about 110 miles per hour (177 kilometers per hour) or thereabouts, while performance cars -- particularly European ones -- tend to be much higher. It even depends on what engine you select. For instance, on the 2011 Ford Mustang, the V-6 model is restricted to 113 miles per hour (181.9 kilometers per hour), but the more powerful V-8 can go closer to 150 miles per hour (241.4 kilometers per hour) [source: Car and Driver].