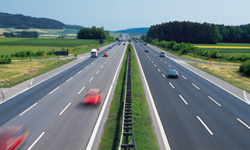 For most Americans, the German autobahn is a near-mythical beast, a serpentine wonderland of multi-lane blacktop where the speed limit has been slain and the fiery horses under the hood can be unleashed.

It sounds almost too good to be true. A public road, in a notoriously buttoned-up country, where a person can drive as fast as their engine size and nerve will allow? Yes, dear readers, there is an autobahn. And these 10 vehicles have been pushed to their limits on this fabled road.

The thing is, it's just a highway, like almost any you're familiar with. It's not a closed course or a race track with rubber tires stacked on the shoulders of the road. So anyone who lets the horses out to play and nears 200 miles per hour is risking not only their own life but also the lives of the poor suckers in the Citroens and Fiats in the next lane. A mistake at that speed is usually, well, pretty terrible.

But that doesn't stop people from putting the super in supercar. Here the 10 fastest times clocked on the fabled autobahn -- and just to keep you interested right to the end, the top two speeds will knock your high-tech, twenty-first century socks off.