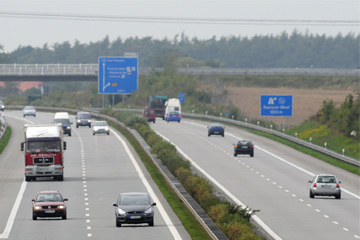 Vehicles drive on the German highway A20 from Luebeck to Stettin, near Rostock, northern Germany.
AP Photo/Frank Hormann

Let's say it together -- autobahn. The harsh German syllables contradict the images the word conjures in the mind of speed freaks the world over. Fueled by on-line videos of turbo-powered Porsches, drivers see themselves pushing 200 miles per hour (321.9 kilometers per hour) on smooth ribbons of highway through the Bavarian heartland. It's a vision that would warm any racer's soul and get the secret racing heart of a soccer dad beating just a little faster.

But it's only a pipe dream, really. Or at least most of it is, anyway. Instead the autobahn, or Bundesautobahn as it's known in German, is simply a federal highway system. Most German drivers consider it point A to point B transit, kind of like the U.S. Interstate System without the speed limit.

Just make sure you're on the right autobahn -- there are three national systems, after all. And with less than a quarter of the total federal highway system open to unlimited speed, make sure you're not breaking a law by zooming through a construction zone, an urban area, a convergence or divergence, or exceeding a safe limit as imposed by weather conditions.

The autobahn might be the stuff of dreams, but the reality -- where the rubber meets the road, so to speak -- is actually the stuff of every day.

Keep reading to learn about the allure of the autobahn, as well as why it's just another road.