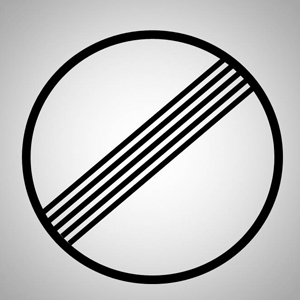 Perhaps no other symbol can make a heart (or a car) race faster than the German Bundesautobahn "derestriction" symbol. It essentially gives drivers the green light to drive as fast as they wish.
HowStuffWorks.com

While some car makers use the autobahn as a proving ground for top speed performance, there are actually very few stretches -- about a quarter of the more than 8,000 miles (12,875 kilometers) of roads -- that have the right conditions for pushing a car or motorcycle to its limits.

The reason for this is simple -- The autobahn was never designed as a speed playground. Bundsesautobahn in German translates to "federal motorway." Similar autobahns are established in Switzerland, Austria, Spain and Portugal. Like the United States, these systems were designed to be an efficient transportation network to spur commercial development and allow for military transport in times of national emergency. Speed is just a byproduct rather than an end, though Germans do admit a certain pride in the association between fast cars and their highway system.

As in America, the autobahn has a posted minimum speed -- 37 miles per hour (59.6 kilometers per hour). This prohibits the use of mopeds, bicycles, smaller cars and other, slower forms of transport on the roads -- including an original and still-standing ban on horse-drawn vehicles.

Maximum speed limits, imposed in heavy congestion areas, environmentally-sensitive stretches, urban areas and where highways merge and diverge, can range from 40 to 100 miles per hour (64.4 to 160.9 kilometers per hour).

Of course these speeds are modified by road conditions, weather conditions and a host of other factors. For instance, a ban on eating and drinking in a car is not only on the books but enforced. For instance, if a driver is pulled over by the police, they can receive an additional fine if the officer determines they were driving and eating -- considered a distracted state.

In 2009, the transport ministry instituted the "Runter vom Gas" campaign, "Kill your Speed" in English. This successful campaign is aimed at younger drivers with a lead foot and access to the autobahn. Reports indicate the campaign has had some success in reducing the number of traffic-related fatalities in that age group [source: BMVBS].

While Germany does offer stretches of speed-limit-free highway, there can be a heavy price to pay if a driver is caught disregarding the country's strict vehicular rules and regulations. Read the next page to find out how a speeding thrill can turn into a speeding ticket.