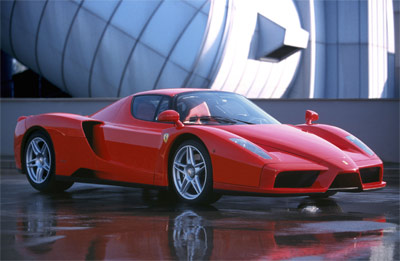 The name Ferrari brings many images to mind: a Formula One racer darting through the turns at Monte Carlo; vice cops chasing drug smugglers through the streets of Miami; ultra-rich drivers cruising winding roads in their six-figure trophy cars; the prancing stallion on a yellow background. The company itself is all about heritage and prestige. The Ferrari company has been involved with racing for more than 50 years, and has been producing road cars almost as long.

Every few years, the two facets of Ferrari combine, taking the high-tech, high-performance designs of Formula One (F1) and putting them into the ultimate dream car. The results have always been exotic, incredibly fast, and incredibly expensive. The latest Ferrari supercar is the Enzo Ferrari, named after the company's late founder.

Enzo Ferrari built the company after splitting from Alfa Romeo in 1940, and the car that bears his name is focused purely on performance. Just being rich isn't enough to get yourself behind the wheel of the Enzo: Fewer than 400 were made, and prospective owners had to apply to Ferrari for the privilege of buying one. Oh, and don't say the name wrong: It's Enzo first, Ferrari second.

In this article, we'll learn how the Enzo was designed to emulate a Formula One car, what powers it, how fast it goes, and why it's so difficult to get one.

Let's start with the engine. 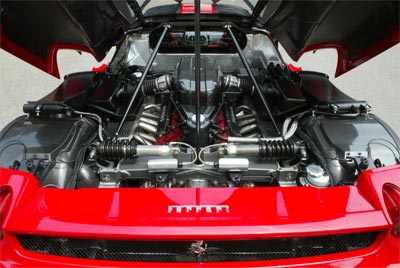 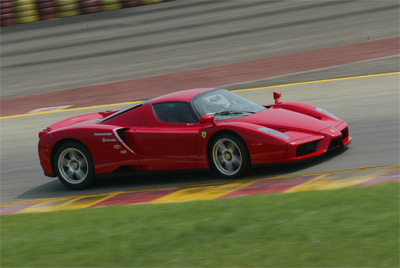 By all accounts, the Enzo is stable when cornering, though it is so powerful that it can be difficult to control. The car does have rack-and-pinion power steering, a small nod to driver comfort. The coil-shock units are pushrod actuated, and the shock absorbers can be electronically adjusted from the cockpit into two different positions. The four-wheel independent suspension is further stabilized by front and rear anti-roll bars.

The Enzo meets the road on four Bridgestone Scuderia tires, specially designed and tuned for this car. The front features 245/35ZR-19s, and there are 345/35ZR-19s on the rear, mounted on forged aluminum, single-nut wheels.

Even the brakes are beastly on the Enzo. The Brembo-produced, 15-inch discs slow the car down remarkably quickly. Almost all the drivers who tested the Enzo reported a few embarrassing laps, creeping through the turns after mashing on the brakes to stem the Enzo's mighty horsepower. It turns out a lighter touch is needed. An anti-lock braking system helps control those steep descents in speed.

Now we'll see how Ferrari's engineers translated the pure racing power of an F1 car into a street machine. 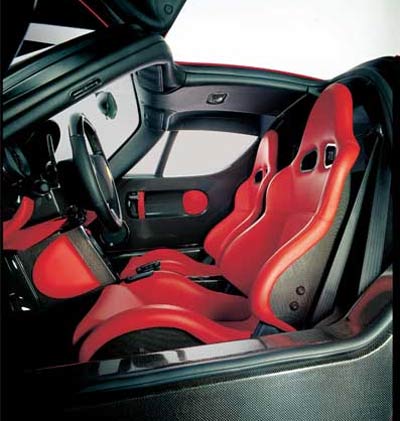 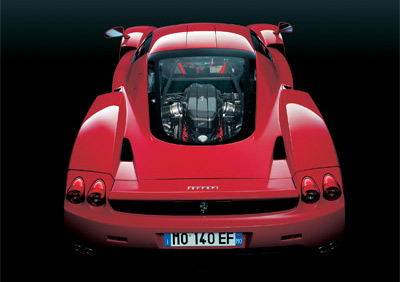 Although the price tag on the Enzo Ferrari puts it out of reach of all but the super rich (or the super obsessed), you'd still think Ferrari would be able to sell more than the 399 that rolled out of the factory at Maranello, Italy. Why did they sell so few? Because that's how many they made -- and that's how many they will ever make. When the Ferrari people call something a "limited edition," they're not kidding.

Part of maintaining Ferrari's prestigious heritage is making sure that not everyone can have one. Only a privileged few can buy a Ferrari, and only the most elite owners and collectors in the world will drive one of these limited-edition production cars. That helps explain why the company can charge a lot for their machines.

The money doesn't stop flowing once the Enzo is in your garage, either. According to a 2003 Car and Driver article, replacing the brake pads costs $6,000, and the carbon-ceramic brake rotors go for $24,000. A special oil must be used (or else Ferrari will consider the warranty void) -- the oil costs $60 a quart.

Which cars are the fastest? Test your knowledge with this quiz from Turbo:

Which Car is Faster Quiz

A stack of cash alone will not get you an Enzo -- Ferrari has traditionally made potential buyers apply to buy one of their limited-edition cars, placing various restrictions on what may and may not be done with the car. They enforce these restrictions by threatening to withdraw perks like factory tours and the chance to buy future Ferraris -- a serious threat to the exotic car collectors of the world.

Previous Ferraris were even harder to get than the Enzo. For example, the Ferrari F50 wasn't sold, it was only leased. Ferrari could yank the lease at any time, and one of the stranger restrictions was that journalists were not allowed to use the car for performance testing (Car and Driver, Aug. 2003). The Enzo is far easier to get into by comparison. All approved Enzo buyers had the option of traveling to Italy to have the seat and pedals custom fitted.

For more information on the Enzo Ferrari and other supercars, check out the links on the next page.