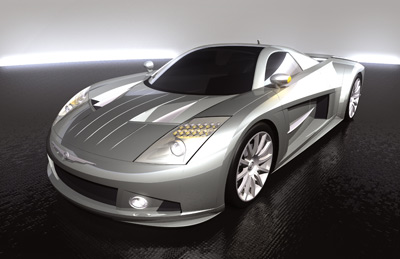 The unveiling of the Chrysler ME Four-Twelve concept car at the 2004 North American International Auto Show in Detroit left some auto-industry observers scratching their heads.

Usually, it's the prestigious European carmakers that craft ultra-expensive, insanely fast supercars, not American companies known more for unpretentious "grocery-getters" than quad-turbo, carbon-fiber land bullets. But the ME Four-Twelve represents a melding of Chrysler's "minivan" ideology with Daimler-Benz's European, performance-centric attitude. The companies are now one and the same, after all, in the form of DaimlerChrysler.

In this article, we'll learn why Chrysler designed a supercar, what the ME Four-Twelve packs under the hood and just what this thoroughbred is capable of. 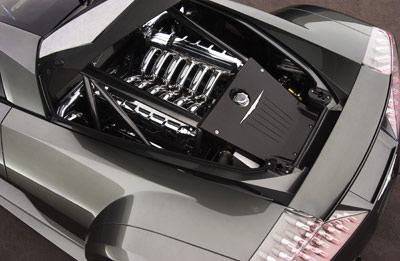 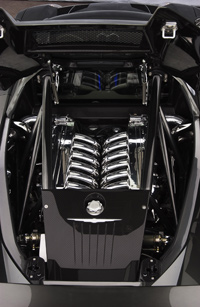 Like most high-performance cars, the ME was built around the engine. The designers started with a twin-turbo V-12 AMG engine, and then put it on steroids. Adding two more turbochargers to the 6.0-liter aluminum power plant cranks the air pressure being pumped into the cylinders to 20 psi.

The electronic, sequential, multipoint fuel-injection system measures the exact amount of fuel needed for each cylinder. A dry-sump oil system helps keep the center of gravity low (and allows the ME to keep its supercar-requisite low profile) and improves performance. With a 9:1 compression rate, the ME operates properly on premium-unleaded gas. Higher compression rates, like the 12:1 ratio typical of race cars and other supercars, generate more horsepower, but they require very high-octane racing fuel.

*Stats calculated from info at http://www.supercarstats.com. 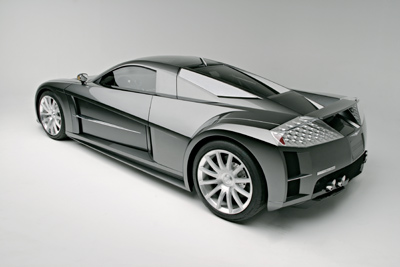 A transmission specially designed by Ricardo is getting the power to the rear wheels.

The 7-speed, double wet-clutch transmission is controlled with electronic thumb shifters mounted on the steering wheel, just like a Formula One car. In-car computers not only assist with shifting (generating 200-millisecond shift times), but they actually predict which gear will be needed next.

After your amazement wears off, you might find yourself wondering what exactly a double wet-clutch transmission is. A wet clutch is simply a clutch immersed in a lubricating fluid, which keeps the clutch surfaces clean and reduces temperatures. This improves performance and prolongs the life of the clutch.

A double clutch allows for seamless shifting between gears. In a normal manual transmission, the clutch disengages, breaking the connection between the engine and the transmission for a moment, whenever the driver shifts gears. This results in a loss of torque and momentum. In a double clutch, there are two clutches -- one for the even gears and one for the odd gears -- nested within each other. If you're in third gear and make the shift to fourth, the clutch for fourth gear engages at the exact moment that the clutch for third gear pulls away.

Fancy equipment is great, but what can the ME do with it? The car hasn't been tested independently, so the only performance stats come from Chrysler, based on computer modeling and its own testing. Chrysler reports:

That's what car lovers call, "Putting you back in your seat." The ME should be able to blast down a quarter-mile drag strip in 10.6 seconds at 142 mph. 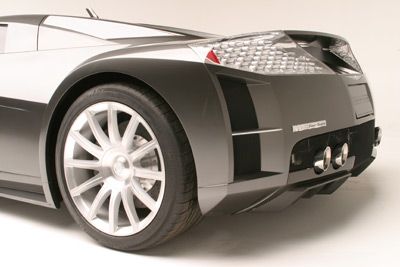 With all that speed, it takes a well-engineered suspension for a supercar to handle the corners. The ME Four-Twelve sports a double-wishbone suspension in the rear, aluminum control arms in the front and horizontally opposed coil-over dampers with electronically controlled compression and rebound tuning. That means the driver can adjust the shocks for different driving conditions with the push of a button. A blade-type anti-roll bar keeps the chassis from rolling during turns. This is adjustable, too. The "blades" are flat, metal pieces that connect the anti-roll bar to the suspension. Imagine a plastic ruler lying flat -- it's very flexible. Now imagine trying to bend it sideways. By turning the blades, it is possible to adjust for a softer or harder anti-roll bar.

We haven't even mentioned the two most important parts of any car's suspension yet -- where the car meets the driver's hands, and where the car touches the road. At one end is a power-assisted, rack-and-pinion steering system with 2.4 lock-to-lock turns in the steering wheel, and a 36-foot (11-meter) turning radius. That makes for some very responsive handling. At the other end is a set of Michelin high-performance radial tires: 265/35ZR19 in the front and 335/30ZR20 in the rear, mounted on cast aluminum wheels.

While the engine handles going from 0-100 mph, getting from 100 mph back down to zero is handled by 15.0-inch ventilated carbon, ceramic-composite disc-brake rotors with six-piston aluminum mono-block calipers. The anti-lock brake system can be adjusted by the driver to different profiles, depending on the situation. There are three race settings, plus settings for highway and street driving.

Now let's take a look at how the frame composition and shape of the ME contributes to its performance.

The ME Four-Twelve looks as fast as it is. Its shape is similar to many supercars because the mid-engine design and aerodynamic necessities of going over 200 mph tend to force cars into an "ideal" high-performance configuration.

The engine is mounted to a chrome-moly frame, a steel alloy made of chromium and molybdenum originally developed for use in high-temperature environments within power plants. This sub-frame is attached to the main chassis, a monocoque tub made of a carbon fiber and aluminum honeycomb. Monocoque is French for "single shell," and means that the chassis is built from a single "tub" with no internal support framing. The structural strength comes entirely from the shell itself. This tub is combined with carbon-fiber bodywork to give the ME Four-Twelve its shape. Aluminum crush zones make the car safer in the event of an impact. This structure not only looks like something from the year 3030, it is also very light and rigid -- very desirable qualities in a high-performance car.

The body is shaped not just to look good, but to aid in performance as well.

The computer-controlled active rear spoiler adjusts itself depending on speed and wind conditions, creating up to 925 lbs of down force at 186 mph. That serves to stabilize the car, increase traction, and aid in high-speed cornering. The rest of the body also creates down force, while underside components are designed to reduce lift from air getting under the car. While creating all this down force, the aerodynamic shape also directs air to the engine compartment, keeping that 850-hp beast cool. 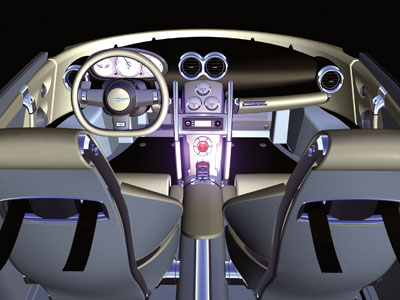 The auto world is buzzing about the ME Four-Twelve. Very few American auto makers have created true supercars. The ME might set the standard for supercars of the future.

Wolfgang Bernhard describes it as "everything we've learned about creating exciting, desirable automobiles."

For more information on the Chrysler ME Concept and other high-performance cars, check out the links on the following page.