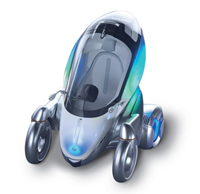 With the unveiling of the Personal Mobility (PM) concept car at the Toyota Motor Show in October 2003, Toyota's designers shared a new vision of personalized travel. Rather than simply rolling out a futuristic vehicle, Toyota unveiled a plan for changing how we travel in our individual vehicles.

Since the advent of the automobile, the car model someone chooses has reflected something about his or her personality. The average American driver spends one hour and 41 minutes in their cars each day, almost more than any other daily activity, according to research from the University of California at Berkeley. Toyota recognizes that fact and has designed the PM to create an entirely new vehicular modality in which people are not isolated by their vehicles, but rather are joined together in a mobile community.

In this article, we'll profile the PM's design, power, and unique features. We'll also take a peek at some other Toyota concept cars. 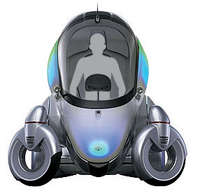 The Toyota PM doesn't resemble the traditional definition of a car. It lacks side doors and accommodates just a single passenger. This single-passenger cockpit design more resembles a flightless helicopter on wheels than a car.

Rather than stepping into a side door, passengers enter through a front hatch, which raises and lowers using hydraulic-lift bars. This front hatch also doubles as the vehicle's windshield.

As the vehicle moves, the wheelbase lengthens to allow the cabin encapsulating the cockpit to recline. The driver shifts from an upright position to a tilted position.

When exiting or entering the vehicle, the hydraulic door lifts and the vehicle's seat slides forward to ease the driver's entry or exit. Once you're seated, or when the door shuts, the seat slides back into the body of the vehicle and is positioned for travel.

Other innovations in the PM design include hollow-center wheels and see-through shaftless construction. Each wheel is independent of the other three, which gives the vehicle unique steering ability.

In the next section, we'll look at the PM's handling ability. 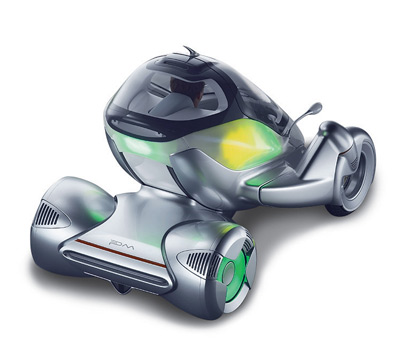 There is no hood on the PM that you can open to get a look at the engine. For one reason, there's no engine. A rear-mounted DC brushless electric motor powers the PM. Toyota hasn't disclosed details about the vehicle's top speed or battery life. The PM is keyless, and a push-button similar to that on a PC starts the motor.

The body arrangement of the PM is not static. The wheelbase can lengthen to allow the cabin to recline depending on the vehicle's mode of operation. The cabin is isolated from the wheels, allowing the PM to vary its posture according to speed or for easy entry/exit. There are three modes of operation, including:

Navigation is also unique in the PM. Toyota designers took out the steering wheel and replaced it with two joystick controllers to control acceleration, deceleration and steering. The PM is equipped with additional computer equipment that allows it to communicate with other PMs. In the next section, we'll take a closer look at this technology. 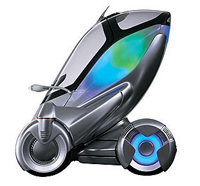 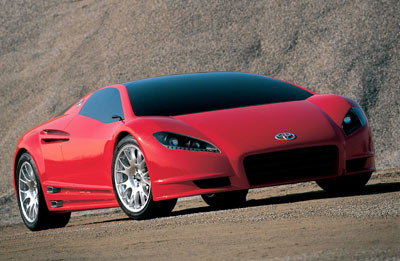 Alessandro Volta invented the electric battery in 1800. Toyota is honoring Volta by naming the first high-performance hybrid vehicle in his name. The Volta is powered by a V6 with an electric motor on each axle. The engine provides 408 horsepower and allows the car to travel 435 miles (700 km) on a 13.7-gallon (51.86 liter) tank.

To prove that hybrid technology can be used in a high-performance vehicle, the Volta can go from 0-60 mph (95.56 km/hour) in 4 seconds and reach a top speed of 155 mph (249 km/hour). It won't compete with Lamborghini or Ferrari with that top speed, but it uses a lot less gas.

The first high-performance hybrid means business; the Volta can go from 0-60 mph in a mere 4 seconds.
Photo courtesy Toyota

The body of the Volta is made of carbon fiber and can seat three people abreast. The car also features drive by wire technology -- a computer actually operates the components that move the wheels, activate the brakes and so on, based on input from an electronic controller. This is the same control system employed in modern fighter jets as well as many commercial planes. The drive-by-wire system allows the passengers to reposition the steering wheel and pedals in front of any one of them. 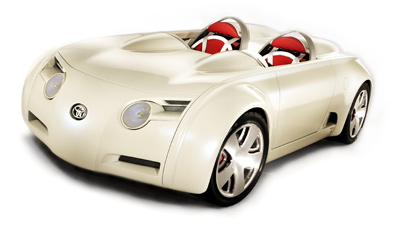 A Toyota hybrid first showcased in 2003, the CS&S is a future vehicle with a retro roadster look. This two-seat, open-topped car combines a 1.5-liter gasoline engine and a 50kW high-output motor for acceleration. A canopy on the rear of the car can slide back to provide another row of seats, albeit a tight-fitting space.

Toyota included a space-touch control interface in which a driver touches a spherical holographic interface to control climate and audio functions. The design is very rounded, from the headlights to the horseshoe-style seating. 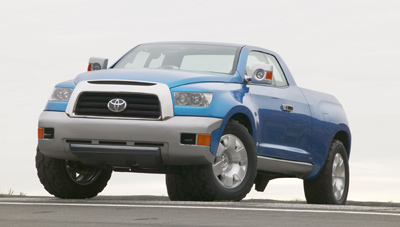 The future of the Toyota full-size truck -- the FTX.
Photo courtesy Toyota

Unveiled at the 2004 North American International Auto Show in Detroit, the FTX provides a preview of what Toyota is planning for its future full-size truck models. This extended cab truck sports suicide doors (a front-hinge door and a back-hinge door that open from the same originating spot) that open at 90 degrees. The FTX is nearly 19 feet (5.79 m) in length, 7 feet (2.13 m) wide and 6.5 feet (1.98 m) tall. The FTX is powered by a large-displacement V8 hybrid, gas-electric engine that delivers V6 fuel efficiency.

On the exterior, the bumpers have integrated tow hooks and special hideaway universal carabiner-type tie-down hooks in the truck bed. An electric generator, air compressor and other outlets are contained in a multi-functional unit under the rear skid plate. It also has a hideaway ramp that extends to the ground when the gate is open. This ramp is ideal for unloading heavy items.

For more information on the Toyota PM concept car and related topics, check out the links on the next page.

These are some sources that we found useful in researching this article: