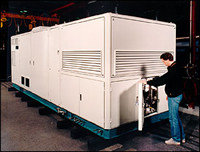 ­If you read the article on fuel cells, you know that they produce electricity from hydrogen and oxygen, and emit only steam. The main problem with hydrogen-powered fuel cells involves the storage and distribution of hydrogen. See How the Hydgrogen Economy Works for details. ­

­Hydrogen gas is not a very energy-dense fuel, meaning it contains little energy per unit volume compared to a liquid fuel like gasoline or methanol. So­ it is difficult to fit enough hydrogen gas into a fuel-cell powered car to give it a reasonable driving range. Liquid hydrogen has good energy density, but it must be stored at extremely low temperatures and high pressures; this makes storing and transporting it rather difficult.

­C­ommon fuels like natural gas, propane and gasoline, and less common ones like methanol and ethanol, all have hydrogen in their molecular structure. If there were a technology that could remove the hydrogen from these fuels and use it to power the fuel cell, the hydrogen storage and distribution problem would be eliminated almost entirely.

That technology is in development. It is called a fuel processor, or a reformer. In this edition of HowStuffWorks, we will learn how the steam reformer works.

The Purpose of Fuel Processors

The job of the fuel processor is to provide relatively pure hydrogen to a fuel cell, using a fuel that is readily available or easily transportable. Fuel processors must be able to do this in an efficient manner with a minimum of pollution -- otherwise, they negate the benefits of using a fuel cell in the first place.

For cars, the main issue is energy storage. In order to avoid having large, heavy pressure tanks, a liquid fuel is preferable to a gas. Companies are working on fuel processors for liquid fuels like gasoline and methanol. Methanol is the most promising fuel in the short term; it can be stored and distributed in much the same way as gasoline is now.

For houses and stationary power generation, fuels like natural gas or propane are preferred. Many power stations and houses are already hooked up to natural gas supplies by pipeline. And some houses that are not hooked up to gas lines have propane tanks. So it makes sense to convert these fuels to hydrogen for use in stationary fuel cells.

Both methanol and natural gas can be converted to hydrogen in a steam reformer.

There are a couple of types of steam reformers, one reforming methanol and the other reforming natural gas.

The molecular formula for methanol is CH3OH. The goal of the reformer is to remove as much of the hydrogen (H) as possible from this molecule, while minimizing the emission of pollutants such as carbon monoxide (CO). The process starts with the vaporization of liquid methanol and water. Heat produced in the reforming process is used to accomplish this. This mixture of methanol and water vapor is passed through a heated chamber that contains a catalyst.

As the methanol molecules hit the catalyst, they split into carbon monoxide (CO) and hydrogen gas (H2):

The water vapor splits into hydrogen gas and oxygen; this oxygen combines with the CO to form CO2. In this way, very little CO is released, as most of it is converted to CO2.

Natural gas, which is composed mostly of methane (CH4), is processed using a similar reaction. The methane in the natural gas reacts with water vapor to form carbon monoxide and hydrogen gases.

Just as it does when reforming methanol, the water vapor splits into hydrogen gas and oxygen, the oxygen combining with the CO to form CO2.

Neither of these reactions are perfect; some methanol or natural gas and carbon monoxide make it through without reacting. These are burned in the presence of a catalyst, with a little air to supply oxygen. This converts most of the remaining CO to CO2, and the remaining methanol to CO2 and water. Various other devices may be used to clean up any other pollutants, such as sulfur, that may be in the exhaust stream.

It is important to eliminate the carbon monoxide from the exhaust stream for two reasons: First, if the CO passes through the fuel cell, the performance and life of the fuel cell are reduced; second, it is a regulated pollutant, so cars are only allowed to produce small amounts of it.

How the Fuel Processor and Fuel Cell Work Together

­ In order to create power, several systems must work together to provide the requ­ired electrical output. A typical system would consist of an electrical load (such as a house, or an electric motor), a fuel cell and a fuel processor.

Let's take the case of a fuel-cell-powered car. When you step on the gas (hydrogen) pedal, several things happen at about the same time:

A similar sequence of events happens in your house when you suddenly increase the electrical demand. For instance, when your air conditioning turns on, the power output of the fuel cell has to increase quickly, or else the lights will dim until the fuel cell can catch up with the demand.

The Downside of Fuel Processors

Although fuel processors can provide hydrogen gas to a fuel cell while producing much less pollution than an internal combustion engine, they still produce a significant amount of carbon dioxide (CO2). Although this gas is not a regulated pollutant, it is suspected of contributing to global warming.

If pure hydrogen is used in a fuel cell, the only byproduct is water (in the form of steam). No CO2 or any other gas is emitted. But because fuel-cell-powered cars that use fuel processors emit small amounts of regulated pollutants, such as carbon monoxide, they will not qualify as zero emissions vehicles (ZEVs) under California's emissions laws. Right now, the main technologies that qualify as ZEVs are the battery-powered electric car and the hydrogen-powered fuel-cell car.

Instead of trying to improve fuel processors to the point where they will emit no regulated pollutants, some companies are working on novel ways to store or produce hydrogen on the vehicle. Ovonic is developing a metal hydride storage device that absorbs hydrogen somewhat like a sponge absorbs water. This eliminates the need for high-pressure storage tanks, and can increase the amount of hydrogen that can be stored on a vehicle.

Powerball Technologies wants to use little plastic balls full of sodium hydride, which produce hydrogen when opened and dropped into water. The byproduct of this reaction, liquid sodium hydroxide, is a commonly used industrial chemical.