Who Pays the Cost of NASCAR Race Cars? 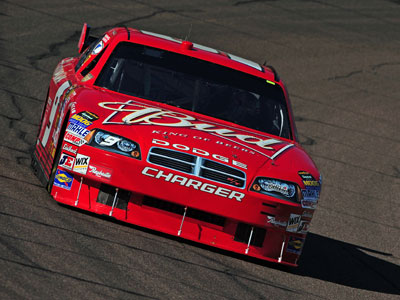 Budweiser pays a lot of money to have Kasey Kahne's car covered with its logo.
Robert Laberge/­Getty Images

­Take one look at a NASCAR Sprint Cup race car and it's clear who's picking up the check for all of that super-engineered beauty. Their names are plastered all over the hood, the doors, the rear bumper -- in fact, every piece of real estate on a NASCAR race car is for sale. These are the venerable NASCAR sponsors, without whom none of this high-speed excitement would be possible.

Corporations shell out big money to be the primary sponsor of a Sprint Cup race team, between $20 and $25 million or more for long-term contracts [source: Margolis]. Primary sponsorship entitles a corporation to prime advertising spots on the hood of the car, on the front of the driver's and pit crew's uniforms, on the sides of the big rigs that haul the race cars across the country, and most importantly, unrestricted use of the driver and his car for print, radio and TV ads.

Then there are secondary or associate sponsorships. In this case, $2 million or $6 million might buy you space on the lower part of the hood, some of the side panels, and if you're lucky, a primary hood spot for some of the lower-profile races [source: NASCAR].

Corporate sponsors not only pay for the car, but help cover all of the research and development and maintenance costs associated with a big-budget racing team. At Hendrick Motorsports, which employs 500 people, sponsors are estimated to cover 65 to 70 percent of all infrastructure costs. The rest is paid for by race winnings and other endorsement deals [source: Margolis].

In the early days of NASCAR racing, the relationship between the sponsor and the race team was predicated on winning. The old adage was "Win on Sunday, buy on Monday," especially when the winning car was available at the local Ford dealership. The first NASCAR sponsors in the early 1960s paid about $200 per race [source: NASCAR].

But now the sponsor/racer relationship is a lot more complex. Instead of being purely about winning, it's about giving the sponsor the most bang for his buck -- i.e. the best return on his investment [source: Margolis]. This can happen on the track or off the track. Even if a big-name driver like Jeff Gordon isn't winning races, his image and personality can still sell boxes of cereal or quarts of motor oil. Today, primary sponsors pay closer to $500,000 a race, so the stakes are considerably higher.

When economic times are tough, race teams need to get creative. For example, when gas prices exceeded $4 during the summer of 2008, some NASCAR teams went shopping for special fuel sponsors [source: Smith]. Interestingly, this was to cover the cost of the diesel fuel for hauling the cars around, not the racing fuel (which is free from NASCAR sponsor Sunoco).

For even more information about NASCAR and the business of sports, follow the helpful links below.