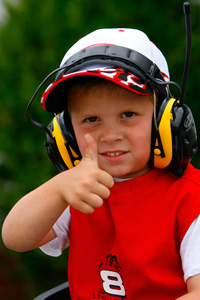 Children like to listen to their favorite NASCAR drivers, too. Hopefully this NASCAR fan's favorite driver will keep the race day chatter G-rated.
Rusty Jarrett/­Getty Images for NASCAR

­Thanks to NASCAR and modern radio technology, you can listen to real-time talk between the driver and the pit crew and other team members. NASCAR racing is one of the few competitive sports that let you do this. It's like listening in during the huddles at an NFL game -- if only you could!

For some time, trackside fans have been permitted to listen to in-car audio, via a personal or rented scanner. A recently introduced device, called the Sprint FanView, conveniently bundles in-car audio scanning with real-time video and other features. NASCAR driver-to-crew audio can also be heard online and via satellite TV and radio. There are even services that provide live in-car audio through cell phones. We'll review some options for listening in on the next page; however, before getting into that, let's discuss what you might hear.

Finishing well in a NASCAR race requires an ongoing assessment of fuel consumption, tire wear and several other factors. Listening in to in-car audio, you'll hear the driver and team discuss strategy: Should the driver run hard right now or hold in place for a surprise move to the front of the pack later in the race? What are the other drivers doing? Near the end of the race, you may hear especially big decisions being made: Should the driver hold the lead and risk running out of fuel before the checkered flag or pull in for a quick pit stop, assuring a finish -- but maybe not as the winner?

­If you enjoy an "insider" perspective, listening to NASCAR driver-to-crew talk can be truly thrilling, as attested to by thousands of fans who show up with their scanners and headphones on race day. A sample list of some services that provide real-time in-car audio, at the track or just about any place you happen to be on race day, awaits you in the next section.

Caution: Real-time Radio May be "Too Real" for Some Listeners

Driver-to-crew audio is real-time, uncensored talk between people who are intensely focused on their work. Listening in, you may hear language that is inappropriate for younger listeners or offensive to sensitive ears. Of course, the drivers and teams know fans are listening in and most strive to keep it clean. But some don't -- and others may "lose it" when things go suddenly wrong during the race. Generally, in-car audio would probably warrant a PG-13 rating, but individual drivers can (and do) go R-rated at times -- without forewarning.