How Garbage-powered Cars Could Work 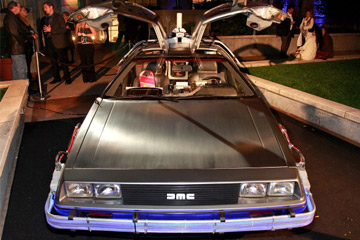 In "Back to the Future," Doc tosses banana peels and beer into Mr. Fusion to power his DeLorean time machine. We're not quite at the point of home cold fusion systems -- or time machines, for that matter -- but we're not far from being able to power cars on garbage like banana peels with a fuel that's not so far from beer.

Powering vehicles with garbage sounds as far-fetched as Mr. Fusion, but it's already being done on a small scale. Creating liquid fuel from solid garbage involves a process called gasification, where heat -- not flame -- transforms carbon-based solids into synthetic gas, which can then be distilled into ethanol, an alcohol that's already added to the gasoline supply in many states, and used in cars already on the road.

Synthetic gas, or syngas for short, can be created from a variety of feedstocks, or source materials, including:

The idea of creating liquid fuel out of solid biomass has been around for a long time. The gasification process was discovered in Belgium in 1609, using wood and coal. Syngas was also known as "town gas," and it was used in streetlamps that had to be manually lit by a lamplighter. During the fuel shortages of World War II, European vehicles were fitted to use syngas made from wood chips, and Apartheid-era South Africa used the same technology when it was under worldwide sanctions.

In other words, this stuff has been around for a very long time. Next, let's take a look at how modern garbage-based syngas is made and turned into ethanol that can be used without any modification to your car.

How to Make Garbage into Gas

The first step is to separate the garbage, or municipal solid waste, at a transfer station. Glass and metal won't work in the gasification process and should be recycled anyway; things like wood chips, grass, tires and diapers will work. "If it gets really hot and melts, that's not a good substance," says Wes Bolsen, Chief Marketing Director at Coskata, Inc. "If it gets hot and turns into gas, like wood in a fireplace, that's good." Any carbon-based substance will fit the bill as a feedstock.

Once the garbage has been sorted, it can begin gasification. The feedstock is heated -- but not burned -- under pressure until it decomposes. Imagine the compost bin in your backyard, which has organic matter inside. As it is, those old lettuce leaves and carrot tops get quite hot and decompose to make compost. Now imagine the bin has no vents, so there's no oxygen to cause combustion, and even more heat and pressure are applied. The same decomposition process would occur, but much more intensely. The decomposition process breaks apart the carbon bonds in the old veggies and turns into something like natural gas -- syngas.

You could stop right here, after the gasification process has made syngas. Some experimental vehicles, like the Honda Civic NGV or even the city of Toronto's new fleet of garbage trucks, run on compressed natural gas. Syngas could probably be used as a fuel for these cars. But what about the millions of cars already on the road that can't use syngas? Coskata adds a couple steps to its process to make ethanol from the syngas that can be easily introduced to nearly every vehicle driving down the road today without changing a thing about the cars.

Once the syngas has been created at Coskata's plant, it's fermented from a gas to a liquid by bacteria in an aqueous environment -- which really means bugs that live in tanks of water. These patented strains of bacteria breathe in syngas (CO, CO2, and H2) and eliminate ethanol (C2). All that's left to do is distill the ethanol from the water. The ethanol is engine-ready, and the water goes back to the bugs with very little being wasted in the process.

And now that we know how fuel can be made from garbage, let's find out why we'd bother to use it.

Little known fact: Making ethanol is nearly identical to making moonshine. So close, in fact, that Coskata adds a little gasoline to its finished fuel -- a process called denaturing. If they didn't add that bit of gasoline, they'd be subject to a $27-per-gallon spirit tax. Plus, if anyone's desperate enough to drink ethanol with gasoline in it…well, they'll puke.

Why power cars with garbage?

Whether you've been driving for three years or thirty, you know that gas prices are volatile -- to put it politely. Political unrest, storms, natural disasters -- any number of things can disrupt the flow of oil and gasoline to the United States, and a disrupted flow means higher prices. Finding new domestic sources of fuel has moved up on our list of priorities in recent years.

Greenhouse gas emissions and global climate change are on our radar, too. Fossil fuels contribute to greenhouse gasses in the environment at nearly every stage of their cycle, from getting them out of the ground to processing them for use to actually using them in our cars. Reducing these emissions would go a long way toward easing the burden on our environment.

The Department of Energy (DOE) notes that syngas, no matter what feedstock is used, allows for a near zero-emissions production process and is configurable for carbon capture storage. It also meets the strictest U.S. environmental emissions regulations for sulfur dioxide, particulates and toxic contaminants.

Turning the syngas into ethanol makes powering cars with garbage even easier. Ethanol is already approved for use and can be found at 10 to 15 percent at many gas stations today. Flex-fuel vehicles would be able to use even more ethanol, often 85 percent ethanol mixed with 15 percent gasoline, in the tank.

There are lots of kinds of garbage that can be used as feedstock, from the trash collected in Seattle to the corn waste in the Midwest to pulp and paper industry leftovers in the Southeast. There's no need to use actual food that people could eat, like corn, when you can use trash that would otherwise be picked up at the curb and end up in a landfill. "There's no way you would pay to put your trash in a hole in the ground when you can make money off it," says Coskata's Bolsen. "It's like burying cash."

Cities like Chicago, which has nearly filled its landfill with municipal waste, are looking at systems like Coskata's for dealing with garbage in the future. There must be a catch, though, right? Maybe.

Keep reading to learn some of the challenges facing this new technology.

Home gasification is possible, if not easy. Just ask Chip Beam, who welded together his own hopper to gasify wood chips and mounted it in the back of his 1988 Isuzu Trooper. Using a gasification process similar to the one used by the Europeans in WWII, he goes 20 miles (32.2 kilometers) for every 25 pounds (11.3 kilograms) of chips he throws in the hopper. He drove it in the first Green Grand Prix at Watkins Glen, where it won the "Most Unusual Car" award. 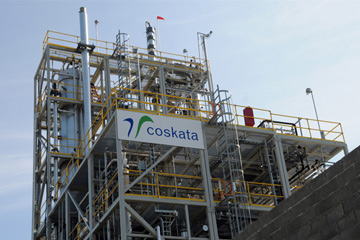 Some feedstocks, like wood chips, are pretty uniform. Each little piece of wood is of the same material, and machines can make all the pieces a similar size. Wood chips, grass, and similar uniform feedstocks are nearly ideal for turning waste into fuel through the gasification process.

Municipal solid waste, though, is another story. Yes, you can use tires and diapers as feedstock, but they're very different materials which require very different treatment before they can begin the gasification process. For one thing, there's more sorting to do to extract the usable trash at a transfer station than there is to get the wood waste at a pulp mill. More sorting and prep work means more cost.

That's not the only problem with the preparation required for garbage in the gasification process. Many waste materials, including municipal solid waste and some biomass feedstocks like grass or corn, have a higher moisture content. These items would have to be dried before being fed into the hopper for gasification.

There's a potential problem at the other end of the process, too: Municipal waste would have a higher ash content. Wood chips are a very efficient feedstock, with only a bit -- maybe 2 percent -- ending up as ash. The rest of its mass is converted to gas (think of a log in the fireplace). Any plant processing municipal solid waste like tires and diapers into syngas would have to have the facilities to deal with the leftover ash.

And, like every new fuel source from electricity to hydrogen, enough syngas needs to be created to allow it to be widely adopted. The nation's largest trash hauler, Waste Management, has spoken with Coskata about a partnership, yet widespread use of garbage-powered cars is still 3 to 5 years in the future. But if those ethanol-spewing bacteria have their way, your car could be a garbage-powered car like Doc's DeLorean soon enough -- no bananas or crazy wires required.

For more information about garbage-powered cars, synthetic gas and other related topics, follow the links on the next page.