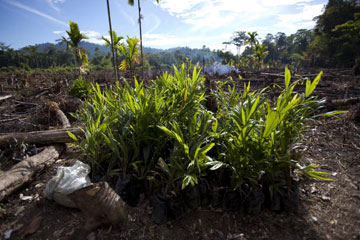 Growing crops for biofuel can have serious environmental drawbacks, such as the deforestation in Indonesia caused by palm oil plantations.
Robert Nickelsberg/Getty Images

Switching the world's energy consumption habits from petroleum-based fuels to biofuel, or plant- and renewable source-based fuels, makes good sense in some ways. Unlike oil reserves, biofuel crops are renewable -- after this year's harvest, plant next year's fuel source. Also, the emissions from many biofuels contain fewer harmful particles and chemicals than petroleum fuel emissions. The biggest selling point for biofuels, though, is the argument that cleaner-burning fuel, made from a source that absorbs carbon dioxide as it grows, can help us cut down on the emissions that are contributing to global climate change.

But the biofuels most likely to be produced on a large scale, such as corn in the United States, sugar cane in Chile and palm oil in Indonesia, carry significant drawbacks. Producing them in an economical manner that supports widespread biofuel use can cause serious harm to the environment. And the economics of producing these fuels in a way that capitalizes on their environmental benefits could make them too expensive to produce and distribute on a large scale.

Biofuel crops are like any plants; they need the right combination of sunlight, water, nutrients and time to grow. And like houseplants or backyard garden vegetables, some of these crops do better in certain regions than others.

This can cause a major dilemma for advocates of plant-based fuel. A biofuel farmer in an arid region such as the American Southwest would have to invest heavily in irrigation to grow enough corn to produce an economically viable quantity of ethanol [source: McKenna]. The alternative, having a diesel-powered truck haul fuel in from another region, presents transportation costs -- and significant emissions -- that limit the fuel's advantage over petroleum diesel [source: Pimentel].

Further complications develop when biofuel for one nation is produced in another nation. Palm oil plantations in Indonesia, for example, have come under fire for causing massive deforestation and significant greenhouse gas emissions. Their purpose? To produce clean biodiesel for European drivers. This outsourcing of biofuel production simply moves the pollution, rather than eliminating it [source: Rosenthal]. 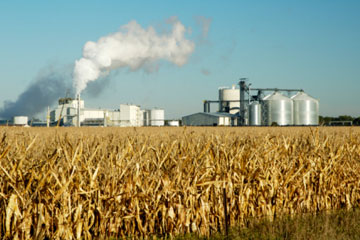 Perhaps the worst economic drawback of biofuels is that, according to some researchers, producing biofuel burns through too many resources to make it feasible.

In a 2005 study, researchers measured the total resource input that went into producing biodiesel from a number of popular crops. They measured the gas burned by tractors plowing the fields, the energy it took to produce and spread fertilizer, the water for irrigation and the energy it took to move it to the fields, and a seemingly endless list of other expenses -- both financial and in terms of greenhouse gas emissions -- that went into producing biofuel. At best, some biofuels studied required 27 percent more energy to produce than they contained. In the worst case, sunflower oil-based biofuel took more than 100 percent more energy to produce than it contained [source: Pimentel].

In the face of these costs, some biofuel advocates argue that new and future technologies, along with economies of scale, will reduce these ratios. Until then, however, it appears that biofuels still have significant economic drawbacks to overcome on their way to replacing petroleum-based fuels.