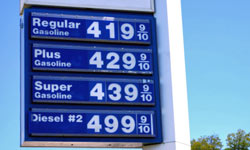 More people are using biofuels as a way to save money and decrease their consumption of fossil fuels.
Hemera/Thinkstock

Jonathan Goodwin is an inventor of the sublime. In his workshop in Wichita, Ks., Goodwin has fashioned a red 2005 H3 Hummer into a supercar. The Hummer is green and mean and includes an electric motor and a turbine that burns biodiesel. The former gas guzzler can now travel 60 miles (96.56 kilometers) on 1 gallon of gas. Like Dr. Frankenstein tinkering with his monster, Goodwin takes automobiles and slices and dices them into eco-friendly speeders. He's even working on a car that will get 100 miles to the gallon [source: Thompson].

Most people don't have to go to such extremes to help the environment. Instead, they just have to fill up with ethanol or biodiesel. Not only do biofuels help protect the planet from global warming by emitting less pollution than fossil fuels, but they also add jobs to the economy and by doing so, help farmers, construction workers and those living in poor rural, areas.

As gas prices rise and global warming becomes more pervasive, more people are using biofuels as a way to save money and decrease their consumption of fossil fuels. They release fewer pollutants, such as carbon dioxide, into the atmosphere, helping decrease heat-trapping gases. Biofuels are produced from so-called "energy crops" that include wheat, corn, soybeans and sugarcane, so they are sustainable. And if every nation can grow its own, there is a high likelihood these biofuels will never run out.

While there are some problems with biofuels, there are many advantages, too. Go to the next page to see what they are.