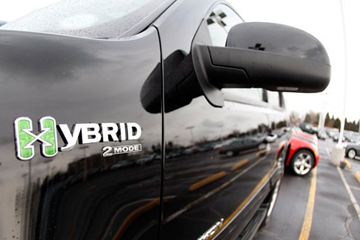 Image Gallery: Hybrid Cars The hybrid logo shines off the front fender of an unsold 2008 Yukon hybrid sports-utility vehicle priced at more than $56,000 on the lot of a GMC Truck dealership in the south Denver suburb of Littleton, Colo., on Feb. 17, 2008. See more pictures of hybrid cars.
AP Photo/David Zalubowski

The world's first mass-produced gasoline-electric hybrid car, the Toyota Prius, launched in December 1997 against a backdrop of growing concern over human-induced climate change and a clamor for greener technologies. People have debated the economic impact of the vehicles, which utilize a dual-mode drive train to combine the low-emission energy efficiency of an electric motor with the superior high-speed performance and power-to-weight ratio of a gasoline engine, ever since.

The discussion continues. Some dispute the relative economic advantage of buying more expensive hybrid models instead of cheaper, but still fuel-efficient, internal combustion cars. They wonder if their fuel savings will offset the difference in sticker price, especially if the hybrid models they shop for come standard with a more expensive repair bill. Good warrantees, loads of options and state and federal economic incentives can tip the scales in the hybrids' favor, but the introduction of less efficient hybrid versions of gas-guzzling full-sized trucks and SUVs has further blurred the picture.

Critics have also pointed out that the economic and environmental impacts of hybrids depend not only on their fuel efficiency, but also upon the costs -- and the political, national security and economic ripple effects -- of the materials and technologies that go into building them. On the other hand, as the market continues to grow, hybrid prices will continue to fall and manufacturers could shift to more secure, economical and environmentally friendly alternative technologies.

Clearly, hybrids present a moving target, and detecting their economic impact remains about as easy as hearing a hybrid's electric motor idling at a stop sign. Still, logic suggests a few obvious and important areas in which to look, and we'll examine three of them in this article: the auto industry, the oil industry and the population. So, put on your thinking caps, fasten your seatbelts and let's get underway. 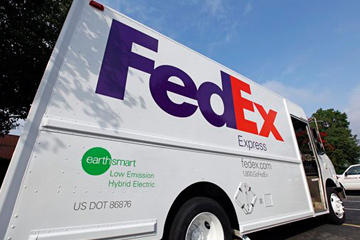 One of the new FedEx electric-hybrid trucks is shown at a distribution center in Charlotte, N.C., on July 21, 2009.
AP Photo/Chuck Burton

Although continuing to grow as a sector, hybrid cars still constitute a very small percentage of the automobiles manufactured and sold worldwide. Ideas can be potent, however, especially when backed by legislation and international agreements.

Once such set of regulations, the Corporate Average Fuel Economy (CAFE) standards, levies economic penalties against auto manufactures failing to meet mandated fuel economy targets. Although many manufacturers would rather pay the penalties than meet the requirements, it nevertheless appears that CAFE standards have had a positive impact on fuel economy trends.

CAFE standards and other requirements have a positive effect on hybrids as well. The U.S. Energy Information Administration projects that more stringent CAFE standards and higher fuel prices will propel unconventional vehicles (vehicles that use alternative fuels, electric motors and advanced electricity storage, advanced engine controls, or other new technologies) to a parity market position by 2035, when they will account for nearly 50 percent of passenger car and light truck sales. By then, they say, consumers will have four varieties of hybrid to choose from: standard gasoline-electric or diesel-electric hybrids, plug-in hybrids with an all-electric range of 10 miles (16.1 kilometers), plug-in hybrids with an all-electric range of 40 miles (64.4 kilometers), and micro hybrids, in which the gasoline engine shuts off only while the car idles.

Hybrid power trains entering the market today cost the purchaser 10 to 30 percent more than an equivalent gasoline vehicle, but some experts anticipate that the gap will shrink to a mere 5 to 15 percent by 2035. Hybrid drivers commonly find that their fuel savings offset 60 to 90 percent of this price difference, and this should only get better as hybrid sticker prices trend downward.

Fleet purchasing, as for rental car and taxi companies, has already begun undergoing a large-scale shift due to new emission standards and fuel economy concerns. Taxi services must wrestle with the relative value of the inherent tradeoffs: Hybrids usually get better gas mileage, but cost more to repair and tend to have less room for drivers and passengers -- unless the taxi companies use SUVs, in which case fuel economy plummets. Economic incentives sporadically crop up to encourage hybrid hacks, particularly in cities with clean air problems. New York's Taxi and Limousine Commission, for example, has offered discounted medallions for hybrids to encourage taxi drivers to give them a go.

Commercial fleets, such as those used by delivery companies, ought to be a great match for hybrids, which excel in stop-and-go traffic, yet the vehicles have as yet failed to penetrate as deeply into this sector as predicted. This is partly because manufacturers do not currently produce commercial hybrid vehicles in a sufficient volume to allow economies of scale to reduce their prices. Commercial shipping companies like FedEx must consider the bottom line, and the estimated payback period for replacing a 10,000-pound (4,536-kilogram) walk-in delivery truck with a hybrid, given gasoline at $3 per gallon, clocks in at around 20 years [source: Wald].

Although it remains too soon to make any definitive predictions, hybrids may be a difficult win for American auto companies now that China, which has historically lagged behind the United States and Japan in gasoline-powered vehicles, has thrown its full weight behind cornering the hybrid and electric market. 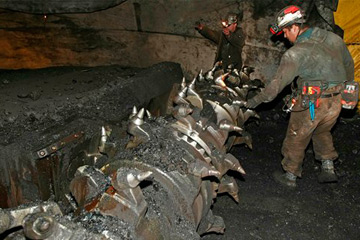 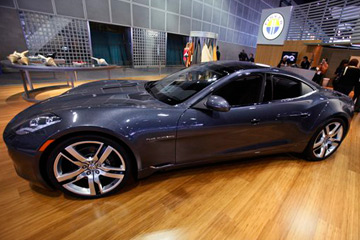