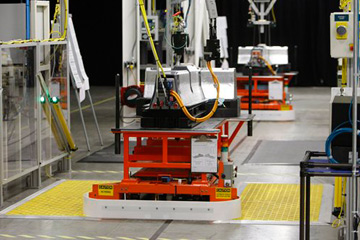 It seems like lithium-ion batteries are everywhere these days, in the tiniest portable electronics and the biggest electric cars. These rechargeable powerhouses will soon be installed in hybrid vehicles, too, replacing the nickel metal hydride (NiMH) batteries used most often in the hybrids of the past decade.

Though lithium-ion (Li-ion) batteries have been expensive in the past, as more of them are made, they become less expensive to manufacture. In the long run, as more and more lithium-ion cells are created, automakers can lower the cost of hybrid cars until the prices are closer to that of conventional gasoline-powered cars [source: HybridCars].

The biggest advantage in lithium-ion technology is its ability to be rapidly recharged, which is exactly what's required in hybrid driving. The power stored in the batteries is easily tapped and readily available, and when technology like regenerative braking is factored into the equation, the cells can be recharged rather quickly.

With lithium-ion technology so frequently in the news, it's easy to forget that these batteries aren't being used much in vehicles -- not yet, anyway. The latest generation of hybrids, like the Chevy Volt and Fisker Karma, use Li-ion battery cells. But the hybrids we've come to know and love over the years, including the Toyota Prius, Honda CR-Z and Ford Escape, still use NiMH battery packs.

Keep reading to find out how these types of batteries stack up against each other.